Among the degrees and certificates lining a wall in the office of former FBI agent, Dr. Brenda McAdoo, sits a framed illustration of three outlined hands. One hand within the next, she explained that the biggest hand belonged to her, the middle belonged to the little boy who drew it, and the third, smaller hand belonged to his brother – a three-year-old boy who’s life Brenda would be negotiating with kidnappers for more than fifteen days. One day during the investigation, the older brother showed Brenda his creation, pointed to the smallest hand and said, “this is my baby brother’s hand who I’ll never see again.”

That was 2000 – a case that thankfully, resulted in a family reuniting again. But it’s still a moment that sticks with McAdoo to this day and serves as a tangible reminder of why she does what she does. “People matter,” she reflects, and it was her goal that day, and for cases that followed, to give people hope and peace amidst crisis.

This is just one example of an array of impactful experiences that Dr. Brenda McAdoo, Program Director for ACU’s online Bachelor of Science in Criminal Justice program, has experienced throughout her career, which first took form while she was a student at ACU.

Born to two ACU graduates and missionary parents, Brenda was no stranger to the impact of the university she would later attend. Brenda graduated from ACU in 1991 with a degree in both political science and public service. She found her passion in criminal justice through the Jack Pope Fellows Program which offers scholarships to exceptional students who are pursuing a career in public service and provides them with real-world experiences outside of a traditional classroom.
Brenda recalls that she appreciated the biblical foundation the university instilled within its courses and the sense of community that shaped her experience there. “Any school can give you an education and a degree, but ACU has traditions that tie you to your faith. Knowing I could integrate my faith into my life was the biggest foundation after graduation. You can stay true to your values and still work in law enforcement,” Brenda says.

And that’s what she did. After graduating from ACU, Brenda attended law school at Pepperdine University, passed the California bar exam and became a prosecutor with the Ventura County District Attorney’s Office. Influenced by the amazing cases she worked as a prosecutor, Brenda joined the Federal Bureau of Investigation (FBI) shortly after.
Additionally, she received her Graduate Certificate in Dispute Resolution from Southern Methodist University, all while obtaining numerous certifications, traveling to talk at conferences overseas, and teaching in-session courses at SMU.

As a Special Agent with the FBI, Brenda investigated crimes against children, violent crime, and organized crime. Also, she served as a member of an Organized Crime Task Force that worked on cases against groups committing extortion, kidnapping and murder for hire.

From 1998 to 2020, Brenda was a member of the FBI Crisis Negotiation Team where she served as team leader for seven years and was a certified Federal Mediator from 2007 to 2020 for the Department of Justice. In addition to her work in-field, she trained aspiring law enforcement in Crisis Negotiation both in the U.S. and oversees.

In 2020, Brenda retired from the FBI after more than twenty-four years of service.

Enabling the Next Generation

After retirement, ACU eagerly welcomed Brenda back as an assistant professor and the program director for ACU’s online Criminal Justice program where she uses her experiences to make the content she teaches come to life in the minds of her students. “I love teaching and being able to help people figure out what they need to do to help others in crisis,” Dr. Brenda McAdoo states. “People need a place where they can feel safe to work out conflict and crisis amidst all of the storm.”

As program director, Brenda wants to incorporate as many real-life experiences she can into the online curriculum and has called on seasoned public service professionals to help teach and prepare the courses her online students will take. “I hope my experiences will give them a good grounding for the type of work they will be doing and enable them to do it effectively.”

While she found great success in the field, she is aware that the Lord went before her and she’s excited to instill those principles in her online students. “You can have all the resources in the whole world, but if you don’t have faith, you’ll get lost in the middle of a crisis,” she said. “Having a sense of self and calm only comes through faith in Jesus and it can be such a blessing to people.” It’s her goal to equip the next generation to enter the field with a mission-mindset and create an online community similar to the one that helped shape her. 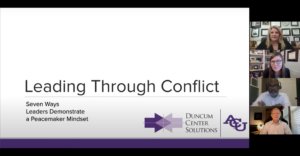 Watch this video on Leading Through Conflict: Seven Ways Leaders Demonstrate a Peacemaker Mindset from the ACU Summit 2020 featuring Dr. Brenda McAdoo as a panelist where she speaks on conflict.

Want to learn more about a possible future in a criminal justice field through ACU online’s Bachelor of Science in Criminal Justice program led by Dr. Brenda McAdoo? Check out acu.edu/online or contact us at 855-219-7300 to discuss the right career track for you.