Since 1906, Abilene Christian University has pursued purposeful learning and enthusiastic devotion to Christ. Over the past century, our campus has moved and expanded, and our academic offerings, athletic fortitude and student accomplishments have flourished along with our growth. We pursue excellence today just as we always have—through our commitment to our mission, values and traditions.

Since 1906, Abilene Christian University has pursued purposeful learning and enthusiastic devotion to Christ. Over the past century, our campus has moved and expanded, and our academic offerings, athletic fortitude and student accomplishments have flourished along with our growth. We pursue excellence today just as we always have—through our commitment to our mission, values and traditions.

In 1903, A.B. Barret and Charles Roberson first conceived of a new venture: “Let’s build a school in west Texas.” Two years later, Barret and Abilene church leader Col. J.W. Childers reached a purchase agreement on a plot of Childers’ land under the condition that it be used for a school named in his honor. In Fall 1906, Childers Classical Institute welcomed its first class of 25 students enrolled in 11 primary and secondary grades.

The school’s early years were cold and crowded—and lacked water supplies. When Jesse P. Sewell became president in 1912—following Barret, H.C. Darden, R.L. Whiteside and James F. Cox—he developed a new approach to managing the institution, declining a salary in order to run the school as a personal business enterprise.

When Batsell Baxter took over for Sewell in 1924, he shifted focus to the student experience. He relaxed restrictions on social privileges and opened doors for the creation of more student activities and organizations.

The school expanded rapidly, and by 1927, the Board of Trustees decided to explore new locations for the campus. San Angelo, a Texas city 90 miles south of Abilene, offered two sections of land and $50,000 for building. The Abilene Chamber of Commerce, eager to keep the burgeoning institution local, countered with $75,000. Decidedly rooted in Abilene, the trustees took the latter offer and purchased 680 acres on a hill just northeast of Abilene on the historic Hashknife Ranch, out of which the present-day campus was carved.

On Sept. 5, 1929, the new campus opened with eight buildings: an administration building, two residence halls, an education building that housed the elementary and high schools, a dining hall, a gymnasium, an auditorium and a house for the president. 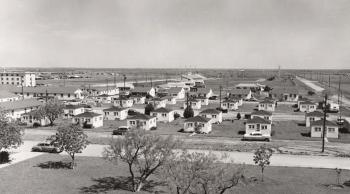 An unprecedented enrollment increase followed the conclusion of World War II, and housing became a pressing matter for the packed campus. Eventually, in the post-war prosperity of 1940 to 1961, ACC completed five residence halls, a science building, a new president’s house, a cafeteria and the Hardin Administration Building.

Following this rapid growth, ACC was officially accredited on Dec. 6, 1951, by the Southern Association of Colleges and Schools. Four years later, enrollment hit 2,000 for the first time. The next year, junior sprinter Bobby Morrow represented the United States at the Olympic Games in Melbourne, Australia, bringing home three gold medals in track and field. He went on to receive the Sullivan Award as the nation’s top amateur athlete and the Sports Illustrated title Sportsman of the Year. His success put ACC on the map as a powerhouse of track-and-field athletes.

In 1962, the Board of Trustees adopted the enterprising Design for Development plan on the recommendations of a four-year master planning council. The campaign raised more than $75 million in the 19 years that followed, resulting in 15 new buildings, 10 building renovations and a $25 million boost to the school’s endowment. The new buildings included vital campus cornerstones such as Brown Library, McGlothlin Campus Center, Moody Coliseum and Gibson Health and Physical Education Center, along with new residential opportunities in Sherrod Residential Park, A.B. Morris Hall, Smith-Adams Hall and Sikes Hall.

During that time, Dr. Don H. Morris served as president for a 29-year term, exceeding that of any other Abilene Christian president. He was succeeded in 1969 by historian, World War II chaplain and former Abilene City councilman Dr. John C. Stevens, who invested in more robust financial aid programs. The college passed 4,000 enrolled students in 1977. 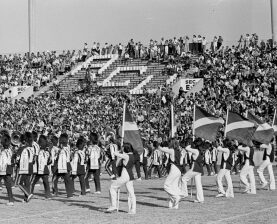 The Board of Trustees unanimously voted on Feb. 22, 1976, to adopt the name Abilene Christian University, following the recommendation of a committee chaired by trustee Jack Pope, chief justice of the Supreme Court of Texas.

Dr. William J. Teague succeeded Stevens as president and oversaw an endowment that grew from $18 million to $56 million during his 10-year tenure, bolstered by $78 million in gifts to the university during the 1980s. These contributions supported the construction of the Mabee Business Building and the Onstead-Packer Biblical Studies Building, as well as the intercollegiate Patty Hanks Shelton School of Nursing in 1981 and the NPR affiliate KACU-FM in 1986.

In athletics, the university endowed its intercollegiate golf program in the name of Byron Nelson, former Abilene Christian trustee and professional golf legend. With a fundraising boost from MLB Hall of Fame pitcher Nolan Ryan, ACU renewed intercollegiate baseball on campus with the construction of Crutcher Scott Field.

ACU’s excellence shone anew in the 1990s during the presidency of Dr. Royce Money, a Bible professor and licensed marriage and family therapist. As a growing national leader in Christian higher education, the university welcomed students from 50 states and 60 nations in record numbers.

Two subsequent fundraising campaigns raised the bar for academic and social quality on campus, bringing in $30 million during the 1993–96 Advancing the Changeless effort and a further $114 million through To Lead and To Serve from 1996–2000.

ACU’s award-winning Study Abroad program launched in 1994 with the first World Class semester in Oxford, England, which expanded to include Montevideo, Uruguay, in 1999 and Leipzig, Germany, in 2007.

In a callback to Bobby Morrow’s 1956 success—and all the remarkable athletes and coaches who followed—Texas Monthly magazine named the Wildcat track and field program as Texas Sports Dynasty of the Century in 1999.

100 Years of ACU: Celebrating the Centennial

As ACU approached a century of excellence, it experienced a record year: In 2000–01, 4,761 students enrolled, annual financial aid reached $40 million and its $142 million endowment was ranked among the top 10 percent nationally. At Commencements in May, August and December, students earned 943 bachelor’s, master’s and doctoral degrees, and on Jan. 13, 2001, the new $17 million Williams Performing Arts Center opened with 92,000 square feet of teaching and performing space for music and theatre.

The official Centennial Celebration began on Aug. 22, 2005, with the Centennial Convocation. For a year, faculty, staff, students and alumni reflected on the remarkable achievements of Abilene Christian’s first century of excellence. Events included publication of The ACU Century, the Centennial Speaker Series, the Centennial Historic Walking Tour and a Centennial Pops Concert with the Abilene Philharmonic. Students added to the university’s legacy by participating in an international Wildcat Week of Service over Spring Break, and the 2006 Centennial Graduation Celebration featured a Commencement address delivered by ACU alumnus and best-selling author Max Lucado.

Now well into a second century, a culture of innovation and creativity is at the heart of everything we do at ACU. The university continues to invest in groundbreaking learning initiatives and technological advancements to serve the success of our students, whether on campus or online.

In 2010, with Dr. Phil Schubert as the university’s 11th president and an award-winning mobile-learning initiative making headlines in the education world, ACU became one of the few Apple Distinguished Schools recognized internationally, a designation representing an exemplary learning environment for innovation, leadership and educational excellence.

On campus, the Brown Library was revitalized in 2006 with the addition of the Learning Commons, then again in 2011 when the cutting-edge AT&T Learning Studio opened for integration of media and academic materials with the latest technology and tools. More campus improvements followed, including the Hunter Welcome Center in 2009, the Royce and Pam Money Student Recreation and Wellness Center in 2011, and the renaming of the Phillips Education Building (formerly Burford Music Center) in 2013. Also in 2013, the first students enrolled in the School of Nursing, and a year later the first cohort in the Master of Science in Occupational Therapy program began to meet. This was followed by the launch of the Dallas campus and the College of Graduate and Professional Studies in 2015, and the purchase of a villa in Leipzig, Germany in 2017, to house the faculty-led ACU Study Abroad program.

In 2019, ACU became the first university in Texas to be designated an Adobe Creative Campus. Our students learn, create, research and develop in cutting-edge spaces such as the Nuclear Energy eXperimental Testing Laboratory (NEXT Lab), Maker Lab, and Griggs Center for Entrepreneurship and Philanthropy. In 2020, ACU expanded its Study Abroad program in Oxford, England with the purchase of a Victorian-era property to house students and faculty.

Thanks to a $95 million Vision in Action initiative, five new or renovated facilities changed the face of campus in ways not seen in more than 50 years.

ACU constructed a new Elmer Gray Stadium for soccer and track and field, and renovated Bennett Gymnasium – one of the eight original structures on The Hill – into a physics and engineering laboratory space. Wildcat Stadium, ACU’s first on-campus football venue in five decades, held its opening Gameday in 2017. The Halbert-Walling Research Center also opened in 2017, bringing ACU’s science facilities into the 21st century by providing an innovative, collaborative and sustainable place for students to research and learn. In 2018, the Robert R. and Kay Onstead Science Center, formerly the Foster Science Building, opened for classes.

Wildcat Athletics: Where Champions are Made

Athletics have always been important at ACU. The remarkable success of Wildcat student-athletes through the years is a tribute to the teams, coaches and the tradition of winning permeating the program. Abilene Christian recruits its student-athletes for their academic and spiritual qualities, as well as their abilities in athletics.

ACU’s 54 national team titles in track and field are the most in one sport by any university in the country. The Wildcats have produced world-record holders, 37 Olympians, several hundred all-America performers and two Olympic gold medalists.

The university transitioned from NCAA Division II to Division I in 2013, joining the Southland Conference that ACU helped found in 1963. In 2018-19, ACU was one of just three universities to have men’s and women’s basketball teams win conference titles in the same season, earning each a trip to the NCAA Tournament in only the university’s second year of Division I postseason eligibility. In 2021, the men’s basketball team experienced its first NCAA Tournament win over the University of Texas. In summer 2021, ACU joined the Western Athletic Conference.

Abilene Christian continues to expand its influence through a holistic view of education and innovative programs that prepare students for a rapidly changing global environment. The university’s strategic growth in recent years dovetails with the unprecedented recognition received in the 2020 and 2021 rankings by U.S. News and World Report. Both years, ACU was the highest-ranking university in Texas in a benchmark focused on student success. Graduates step into the professional world as change-makers dedicated to building community, deepening faith and propelling ACU’s mission of transforming all those they encounter through Christian service and leadership.