Several other students call it amazing, too, because a grant from NASA to ACU’s Department of Engineering and Physics brought Schneller’s project to the Abilene campus. Now Schneller and fellow seniors Michael Ranger, Koby Rodgers and Cole Shannon are all assisting in the research.

Schneller, who will graduate with an engineering degree in May, spent the summer working with the Science and Heliophysics Antenna Array for Radar and Communication (SHAARC) program at Kennedy Space Center. 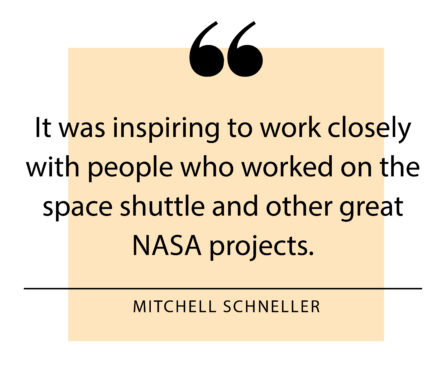 The purpose of SHAARC is to develop ways of using antenna arrays for studying the sun and atmosphere and for detecting objects in outer space that could threaten the Earth and space travel, Schneller explained. The researchers are specifically working to develop a spectrometer using field programmable gate arrays (FPGA).

“While I was there, I helped to integrate some new equipment into their signal processing chain to help them detect solar radio bursts,” Schneller said. “I also helped perform maintenance on their antenna array. I learned a ton about signal processing and radio frequency operations.”

Before returning to campus, Schneller proposed a plan to continue the project in the engineering program capstone course called Senior Clinic, which allows students to work on real-world problems in partnership with industry. The students gain experience, and the companies benefit from fresh perspectives, often identifying future employees with the skills and experience that lead to success.

NASA awarded ACU a grant to develop an instrument prototype for the detection and location of RF signals produced by debris entering through the atmosphere. Dr. Larry Isenhower (’05), associate professor of engineering and physics, is the principal investigator, and Schneller has taken the role of project manager for the team of students supporting the effort.

Working with the ACU design team are NASA engineers John Kiriazes, senior project manager at Kennedy Space Center, and Robert Brown, technical manager, who were Schneller’s mentors during his summer internship. The group meets weekly to perform studies related to the design of the RF detection system. The team has successfully completed the critical design review and is now in the development stage of a prototype, Kiriazes said.

ACU’s combined Department of Engineering and Physics allows integration of the two disciplines, said Kiriazes. “Research projects funded in our branch organization require knowledge, skills and abilities from both,” he said.

An added bonus was giving Schneller the opportunity to use what he had learned during the internship to help move the project forward.

“Mitchell did a great job for us while he was here,” Kiriazes said. “He demonstrated impressive technical and interpersonal skills.”

Schneller says he felt well prepared for the internship thanks to his ACU professors. “My engineering and physics classes gave me a solid background in the technical experience and problem-solving skills to quickly pick up what I needed to learn for the job,” he said.

And his education took another leap over the summer. “The engineers who were my mentors are great people. They are brilliant engineers with colorful careers yet are very humble and relatable people,” he said. “It was inspiring to work closely with people who worked on the Space Shuttle and other great NASA projects.”

Schneller hopes the internship will lead to a job after graduation, and that’s entirely possible. “Many full-time NASA employees begin their career through NASA internships,” Kiriazes said.