Randy Brewer (’93), producer of award-winning music videos for Carrie Underwood and Taylor Swift, is putting his talent to work for his alma mater creating a series of TV commercials to air throughout Texas beginning in July.

The choice to have Brewer produce commercials for ACU Online was an easy one.

“Randy Brewer, like most alumni, definitely had a great experience at ACU and wants to see the university be successful,” said Steven Rutt, associate vice president of marketing and analytics for ACU Online. “He knows the skills he learned have been instrumental in building his career in film and media – and he knows there are so many interesting stories out there about alumni.” 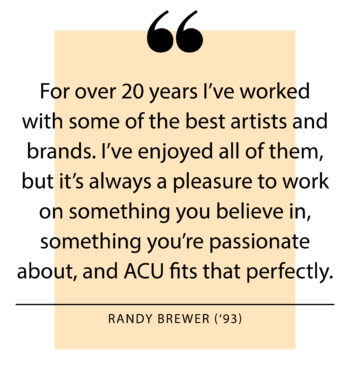 “For over 20 years I’ve worked with some of the best artists and brands,” Brewer said. “I’ve enjoyed all of them, but it’s always a pleasure to work on something you believe in, something you’re passionate about, and ACU fits that perfectly.”

A 1993 graduate with a bachelor’s degree through the Department of Journalism and Mass Communication, Brewer credits ACU with setting the stage for his career. “ACU was where my entrepreneurial spirit was allowed to develop,” he said.

From working on a video component of the Prickly Pear yearbook to filming football games and creating other content for departments, Brewer was able to graduate with a demo reel under his belt. He was recognized as ACU’s Young Alumnus of the Year in 2010 and received JMC’s Gutenberg Award for distinguished professional achievement in 2014.

Each year, Brewer returns to campus to mentor aspiring filmmakers and serve as a judge for the annual FilmFest competition.

“I’ve never stopped coming back to the campus to help students move forward,” he said. “I’m so impressed with the way the university has gotten better and better, and what they are doing online is just one of the many advancements they’ve made since I graduated.”

Brewer’s TV spots will tell the stories of three online students and how the university has impacted their lives. Filming took place in Dallas and Austin, and the commercials are now in the editing phase.

“I’ve always been amazed at the talent coming out of the graduates I’ve met over the years,” Brewer said. “We really do have a lot of amazing stories to tell and I’m honored to be able to tell some of them.”

Zaviar Gooden is an MBA student who played five seasons in the NFL and has recently started a personal training business with his wife. Clay Hunt earned his MBA in 2017 and started an oil and gas business, Oso, that focuses on integrating faith into the business culture. After graduating with a master’s degree in organizational development in 2020, Deandra Porter was determined to make a difference in her community and does that while working for a state senator in Austin.

“Our goal was to let the real passion and purpose of the people we featured be the script for the spots, and I’m really happy with the authentic stories we captured,” Brewer said. “We all have a story to tell, to live and dream, and my hope is prospective students will be inspired by the true stories we present of those who choose to get their degree online with ACU.”

Currently, about 1,400 students are pursuing degrees through ACU Online. The programs are geared toward working adults who would like to further their education while continuing their careers.

“The working adult market is very focused on how a degree can impact a person’s career immediately – whether that be a promotion, a change in fields, or a venture into entrepreneurship,” Rutt said. “We also know lives are transformed as students have the opportunity to combine that career focus with a sense of calling and purpose.”

In addition to 24 graduate and certificate programs, ACU Online will have a total of 15 undergraduate degrees by this Fall 2020.