A memorial service for the beloved Abilene Christian University professor emeritus of Bible, missions and ministry will be Monday, Dec. 23, at 2 p.m. at University Church of Christ (733 E.N. 10th St., Abilene, Texas 79602), with a visitation at 10 a.m. 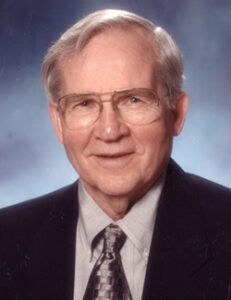 Starting in 1961 as an assistant professor of Bible and religious education, Brecheen retired from ACU in January 2007. For all of those 46 years he served as a professor of Bible and religious education, well known for his Family Relations course that packed Walling Lecture Hall every single semester until he moved to the Teague Lecture Hall in 1990 when the new Onstead-Packer Biblical Studies Building opened. The course is still in the university’s Catalog but no one else has ever taught it.

He directed Lectureship until 1993 during an era when up to 12,000 people annually flocked to Abilene for the four-day February event that included dozens of speakers, hundreds of classes and a long list of special events. A 1989 feature story in the Abilene Reporter-News was headlined, “Mr. Organization.” Brecheen, typical of his genuinely cheerful and humble outlook, downplayed his role, saying he just took what Thomas had created and fine-tuned it a bit here and there with the help of his secretary.

For most people, that would be enough – that and a private marriage and family counseling practice, and serving as an elder at the University Church of Christ where he was education director from 1961-74.

“Carl had the uncanny ability for organizing complex events, all the while appearing calm and happily engaged with those around him,” said ACU provost Dr. Royce Money (’64). “He was among the best I have ever seen at that style of leadership.”
Brecheen’s broadest influence, however, began in 1974 when he partnered with his best friend and college roommate Dr. Paul Faulkner (’52) – now professor emeritus – taking their three-day Marriage Enrichment Seminar to more than 90,000 couples in 33 states and seven countries. Thousands more watched the Marriage Enrichment videos or read their book: What Every Family Needs: Whatever Happened to Mom, Dad & Kids?

“There is no way to measure the enormous influence of the Brecheen and Faulkner Marriage Enrichment Seminar series,” Money said. “For tens of thousands of couples, the weekend experience with Carl and Paul turned their marriages in a more godly relationship that re-shaped the direction of their life together.”
Brecheen and Faulkner met as 18-year-old freshmen at ACU.

“We happened to be walking from the church, where we’d met, to the dormitory where he was living,” Faulkner recalled.
Heavily recruited for his talents in track and field, Faulkner was in the “A dorm” where the other student-athletes lived. But after only a day or two he learned Brecheen had not been assigned a roommate, so he packed up his stuff and moved in with Carl.”

The two made quite the pair when they spoke together from stages across the country.  Faulkner was the tall, lanky athlete with a deep voice and slow drawl. Brecheen, much shorter, had an almost elfin persona with twinkly eyes and a quick chuckle.

Over four years of college they would both meet their wives. Brecheen married Ethelyn “Smitty” Smith (’53) of Colorado City, Texas, on Oct. 21, 1952. While Carl completed three graduate degrees – an M.A. and M.R.E. from Harding University in 1955 and 1956, and a D.R.E. from Southwestern Baptist Theological Seminary in 1965 – they added two daughters and a son to the family, all of whom graduated from ACU.

Carl was born Nov. 26, 1929, in Hollis, Oklahoma, where he graduated high school in 1948. After earning his bachelor’s degree from ACU, he preached full time in New Blaine and Oil Trough, Arkansas, and Rhome and San Angelo, Texas, before moving to Abilene.

In retirement, Carl and Smitty found ways to minister to families and others who benefited from their deep experience and innate kindness. They invited a series of newly single moms, each recovering from divorce and learning to navigate solo parenting, to breakfast once a week for as long as they needed the prayer and wisdom doled out with coffee and a simple breakfast at the Brecheens’ kitchen table in their house on Cedar Crest, just blocks from the campus.

As Faulkner tried to describe his friend of 70-plus years, the word he kept coming back to was authentic.

“He had an amazing ability to teach a class, to teach lessons out on the road, and in his conversation with me and I with him, he was authentic in every aspect. It was totally him. They were all woven together,” Faulkner said.

Faulkner has now moved to Fort Worth to be closer to his daughters, but for several of the last few years he lived in Abilene and spent one morning a week sitting with his old friend so Smitty could have some time away to get her hair done or run errands.

“He was good at everything – heart, mind, soul, family, God – he had it all together,” Faulkner said. “And it was still there when I was with him when he couldn’t talk anymore.”

“He was my very best friend,” Faulkner said. “I could be kind of ornery. He never was. He was just amazing.”