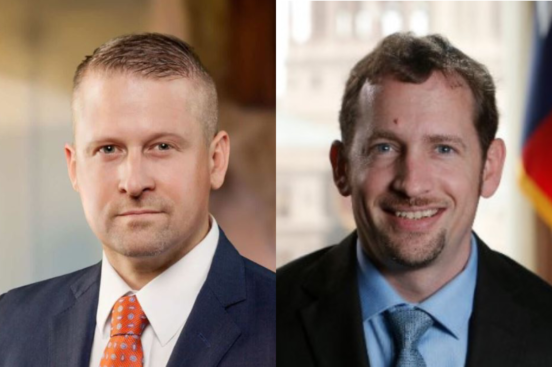 Two Abilene Christian University graduates, Matthew Kacsmaryk, J.D., and Brantley Starr, J.D., have been confirmed as U.S. District judges.
“It is rare for any Christian university to have a federal judge confirmed by the U.S. Senate,” said Dr. Neal Coates, chair of the Department of Political Science and Criminal Justice, “and since January ACU now has two.” Other four-year universities in the U.S. with two confirmed federal judges in 2019 are: University of Texas, Auburn, Texas A&M, Florida and Indiana.
On June 19, the U.S. Senate approved President Donald Trump’s nomination of Kacsmaryk, a 2001 ACU graduate, to fill a vacancy on the U.S. District Court for the Northern District of Texas. Kacsmaryk was deputy general counsel to First Liberty Institute, where his practice focused on religious liberty litigation in federal courts and amicus briefs in the U.S. Supreme Court. From 2008-13, he served as an assistant U.S. attorney in the Northern District of Texas. In 2013, Kacsmaryk received the Attorney General’s Award for Excellence in Furthering the Interests of U.S. National Security. He earned his juris doctor degree with honors from The University of Texas School of Law in 2003.
Starr, a 1999 ACU graduate, was nominated by Trump to fill another vacancy on the same court. He was confirmed July 31. After graduating from The University of Texas School of Law, Starr clerked for Texas Supreme Court
Justice Don Willett, then served as the state’s assistant solicitor general. Starr practiced commercial and appellate litigation at King & Spalding, L.L.P., and as staff attorney to Texas Supreme Court Justice Eva Guzman. He returned to the Texas attorney general’s office in 2015 as deputy attorney general for legal counsel before his promotion to deputy first assistant attorney general. He earned his J.D. from The University of Texas School of Law.
While at Abilene Christian, both Kacsmaryk and Starr participated in the Pope Fellows Program, which prepares students for careers in public service.
This August, the Department of Political Science and Criminal Justice welcomed the largest number of pre-law students ever in the history of ACU.
“I want people to know that ACU is a great place to prepare for great success in legal careers,” Coates said.