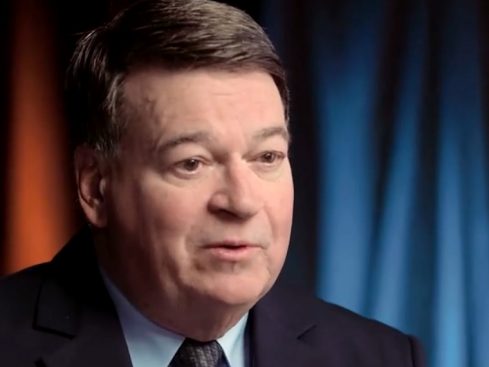 Bob Delony didn’t need any more credentials to earn the respect of the students in his criminal justice classes at ACU, but he got them anyway.
His students weren’t prepared for what they were about to see one day in class when Delony directed their eyes to the projection screen. Soon, a new episode of “On the Case With Paula Zahn,” a popular segment on the Investigation Discovery channel, started rolling. It was titled, “Rumors, Lies and Murder.”
As the students watched, they couldn’t believe their eyes when all of a sudden their instructor appeared on the screen being interviewed about a 1984 double homicide and sexual assault of one of the victims in Houston that wasn’t solved until 2015.
“The whole class is like ‘wow,’ ” said Kamron Taylor, a sophomore criminal justice major from Lubbock. “It was crazy.”
On March 5, 1984, when Delony was a homicide detective with the Houston Police Department, he and his partner responded to the double murder of two sisters, Yleen Kennedy, 33, and Lillie Kennedy, 23. Their bodies had been discovered by their  father, Jack Kennedy.
“He was in great distress,” Delony said in answer to a question from Zahn. “A parent making the initial discovery – that’s unimaginable.”
The episode of “On the Case With Paula Zahn” aired in March. Delony uses the actual case as a teaching method in his classes. But still, his students weren’t prepared for seeing their instructor on the screen and watching a live documentary of the case.
“It’s been so great for my class,” Delony said.
Taylor can vouch for that. She said the students already respected Delony but seeing him in a TV documentary let them get a glimpse of their instructor when he was an active homicide detective.
A point Delony stresses in class is the significance of the officer’s initial report. Today, he has a copy of the entire file from the 1984 case, including some crumpled pages from an old stenographer’s pad with notes written down. A packet containing the file also includes page after page of the typed report from the day he responded to the call. It would prove to be valuable three decades after the case.
“You write that first word with a view toward forever,” Delony tells his students. “You don’t know where it’s going.”
The process of recreating the case for television started in August 2018 when Delony received an envelope from the offices of the TV show, which is filmed in Manhattan. Inside was a letter from Zoe Vock, associate producer, inviting Delony and his wife, Mikee Delony, who is chair of ACU’s Department of Language and Literature, to fly to New York, all expenses paid, to be interviewed for the show. The letter, laminated for preservation, is in the case file packet Delony keeps in his office.
The trip was arranged for October 2018. Also invited was Paul Motard, a detective with the Houston Police Department’s cold case unit that solved the crime 31 years after the fact and a niece of the murdered sisters.
“She’s been on a crusade ever since,” Delony said.
Motard, the niece and Delony all appear numerous times in the TV show. The key to cracking the case came in 2014 when the Houston Police Department’s cold case unit got a call from the lawyer of an inmate in an Indiana prison who claimed to have information about the double murder in Houston.
Motard flew to Indiana and interviewed the man, who told about an acquaintance, Edmund Degan, coming to his home on the morning of the murder in 1984 with a quilt wrapped like a bundle and containing items that proved to be from the crime scene. The Indiana prisoner said Degan asked him for a sledge hammer, which Degan used to smash a pistol that turned out to be the murder weapon. Other items in the quilt were burned in the man’s backyard.
On Jan. 14, 2015, Houston police arrested Degan, who still lived in Houston. In interviews, Degan denied committing the murders and even submitted to a DNA test. The Houston Police Department still had a viable rape kit from the time of the crime and Degan’s DNA matched. When the test proved positive, Degan confessed to murdering one of the sisters and was given a 15-year sentence.
Delony had interviewed Degan, an acquaintance of one of the sisters, at the time of the murder, but there wasn’t any evidence to charge him with the crime.
“He just wasn’t on the radar far enough to make it work,” Delony said.
Delony earned a bachelor’s degree in behavioral management science from the University of Houston in 1973. He spent the first part of his career with the Houston and Humble police departments before 2006 when his wife, who taught at the University of Houston, was offered a teaching position at ACU.
“We sold our house in four days,” Delony said. “That was supposed to happen.”
From 2006 to 2018, Bob Delony worked full time with the ACU Police Department before being named a criminal justice instructor. He still works part time with the ACU police. As good as Delony is at police work, that was never the sum total of his life. He always had a heart for ministry and served as a youth minister while working as a police officer.
“My radio call name was ‘preacher,’ ” he said.
Today, in addition to working with the ACU Police Department and teaching, Delony also is an accredited chaplain. He was honored recently with the Faith Integration Award, given by the College of Arts and Sciences in recognition of how he weaves faith into all his interactions with students both inside and outside the classroom.
It’s not surprising that Delony is able to integrate faith and work. If he could do that while working as a homicide detective, he could do it anywhere – and he does.
“My work has always been ministry,” he said.