Abilene Christian is the highest-ranking university in Texas in a U.S. News and World Report benchmark focused on student success. Here is a look at some of the people and programs that make our student experience exceptional.

A box of Morton’s salt sitting on a table and mention of a Crock-Pot makes visitors to ACU’s NEXT Lab wonder if they are in the right place.

But just a few seconds into an explanation from Dr. Rusty Towell (’90), a professor in the university’s Department of Engineering and Physics, dispels any misgivings. This really is the Nuclear Energy eXperimental Testing (NEXT) Lab that came as a result of the university’s Vision in Action initiative.

The $45 million science component of the initiative included turning the old Bennett gym into the Engineering and Physics Laboratories at Bennett Gymnasium. Inside the NEXT Lab, ACU students and faculty are tinkering and testing, measuring and recording.

What they do in the lab could someday lead to global solutions to the world’s need for energy that is less expensive, water that is pure and abundant, and medical isotopes used to diagnose and treat cancer.

They are doing that by researching molten salt, rather than water, as a coolant for nuclear reactors. These undergraduate students at ACU are getting hands-on experience that only graduate students get in most universities.

“It’s been something that’s really set us apart for decades,” Towell said.

The small-scale testing system in NEXT Lab uses a specially-built metal box with a steel container in the center that works something like a Crock-Pot, Towell explained. Five gallons of regular table salt are poured into the container and coils around it begin to heat up, eventually raising the temperature to 1800 degrees Fahrenheit, melting the salt.

When the salt cools, it turns into a solid mass, making molten salt a safer coolant than water, which turns into a vapor that could cause an explosion when heated.

A problem with the technology now is that no flow meter exists that can withstand the 1000 degrees–none exists yet, but ACU students are working on the problem. The meter is essential in real-world use.

The students are experimenting with using sound to ping off the metal pipe the molten salt flows through to determine its flow rate, rather than a meter that is inserted into the pipe.

One reason ACU wanted to set up NEXT Lab, Towell said, is so students can do the same research on campus that usually requires travel to one of the United States government’s nuclear research facilities. ACU has been sending students on a regular basis to Brookhaven National Laboratory on Long Island, Los Alamos National Laboratory in New Mexico, and Fermi National Accelerator Laboratory near Chicago. The university still will send students there, but even more students can get research experience with an on-campus lab.

A trip to Brookhaven, where ACU has had a partnership for 18 years, proves just how exceptional ACU’s undergraduate research program is, Towell said. In a facility filled with 500 researchers, only four or five will be undergraduate students.

“And they’re all from ACU,” Towell noted with pride.

Another point of pride for Towell is the inclusion of students from a variety of disciplines in the NEXT Lab. Engineering, chemistry, physics, and computer software students all are learning and contributing to the work going on there.

One student developed a 3-D model of the loop that is used to circulate the molten salt. Then, other students used ordinary plumbing pipe and fittings to create the loop.

NEXT Lab fits nicely with the university’s mission, which is to educate students for Christian service and leadership throughout the world: “It is hard to imagine a program better suited than the NEXT Lab to serve those who are most in need around the world while fulfilling ACU’s 21st-Century Vision to build distinctive and innovative programs, and produce leaders who think critically, globally and missionally. Students working in the NEXT Lab will be extremely well prepared to serve and lead throughout the world in the fields of nuclear science and engineering,” he said. 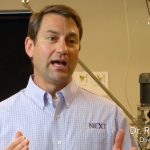 Remember the adage “Don’t judge a book by its cover” when meeting NEXT Lab director Dr. Rusty Towell for the first time.