It seemed like destiny when Dr. Tony Rector noticed a change of address from where he had been sending checks to support a medical missionary he knew.

The checks had been sent to Christian Health Service Corps at an address in Boerne, near San Antonio. Now, the address said “Fruitvale, Texas,” located in East Texas just seven miles from where Rector and his wife, Dana, had bought property for weekend getaways. Instead of mailing the check, Rector just drove to the Fruitvale address, knocked on the door, and met Greg and Candi Seager, founders of CHSC.

That meeting turned out to be a “God thing” for both parties. Rector, who was campus physician at ACU from 1999 to 2008, now owns Southlake Integrative Wellness Center near Dallas. And for the past year, he has been on the board of Christian Health Service Corps, an interdenominational organization that supports medical missionaries. From that initial meeting, a friendship has grown.

Not only had the Rectors been financially supporting a CHSC physician, they also believed in the organization’s philosophy of providing long-term medical missionaries to remote, underserved areas of the world.

The Rectors aren’t the only people involved with CHSC with ties to ACU. One of the Rectors’ daughters is an ACU graduate and two others attended the university. Other ACU alumni who are healthcare providers with CHSC are:

Tony Rector’s association with Christian Health Service Corps can be traced to his days as ACU’s campus physician – although he didn’t know it at the time.

He did know the Brockingtons and Brantlys and later met the Caires when they were serving medical missions in Peru. Rector has served on more than 25 short-term medical missions in Central America, Haiti and Africa. But he is a strong believer in long-term missions, serving a year in rural Guatemala. The belief that long-term service is needed is one reason he was attracted to Christian Health Service Corps.

Greg and Candi Seager had the same revelation about long-term service. Both are registered nurses and served on eight medical mission trips to Latin America. They also served with Mercy Ships from 2003 to 2006. And then the revelation hit.

“We either need to stop doing this,” Greg realized, “or do it full time.”

In 2009, Seager was at a conference on global health when the Lord began speaking to him about long-term service. He went home and told his wife.
“She was less excited,” Seager said, but she eventually caught the same vision.

Hundreds of mission hospitals worldwide are fighting for survival, Seager said, because healthcare providers come and go. There wasn’t an agency specifically dedicated to recruiting, training and supporting healthcare providers and educators for long-term service – until the Seagers answered the call.

“God laid that as a burden on our heart,” Seager said.

According to its website, Christian Health Service Corps is dedicated to transforming the health of children and families in their communities. CHSC health professionals save lives while imparting knowledge that builds community capacity for sustainable change. With respect for human dignity, they work to build community capacity to:

A concern for healthcare providers in medically underserved parts of the world is the high mortality rate for infants and children. One pediatrician saw 300 children die in two years – much higher than in the United States or other countries with ready access to medical care.

CHSC recognizes those issues, Seager said, and offers training and emotional and spiritual support for healthcare providers working in those environments.

Today CHSC supports healthcare providers in 16 countries. They work in mission hospitals that average 100 to 200 beds. CHSC does not run the hospitals, Seager said, but rather works with the sponsoring churches or organizations to provide physicians, nurses and educators.

To learn more about Christian Health Service Corps and its providers, go to www.healthservicecorps.org 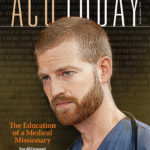 When Kent Brantly, M.D., (’03) and his wife, Amber (Carroll ’06) told their young children they were moving back to Africa five years after Kent nearly lost his life to Ebola, a tangle of emotions emerged – sad, excited, happy, nervous. Read more 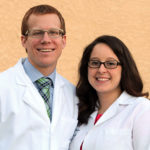 “Doc, can you help…” is a desperate plea that Drs. Jared (’07) and Jenny (Fulkerson ’07) Brockington and other medical missionaries hear day after day as they live out their calling to serve God’s most vulnerable people. Jared and Jenny are among several ACU alumni practicing in underserved parts of the world through Christian Health Service Corps. Read more