Editor’s Note: Nick Tatum (’13) is director of student productions at ACU and is an instructor of communication and sociology.

As Sing Song is approaching, we’re gearing up for some changes. Below are the five major changes you can expect for Sing Song 2019.

This year’s hosts and hostesses will focus more on singing and less on dancing.

While these talented students will still perform a handful of show-stopping, dance-heavy numbers, a majority of the songs will be more vocally heavy and less dependent on movement. This change will showcase the talent of our students and potentially create more interest among students thinking about auditions for one of these roles.

There will be no overall theme for the production.

While Sing Song’s hosts and hostesses have often followed a general theme for the last three to four decades, club and class acts were required to align their act with the overall Sing Song theme only since the new millennium. While this has given each show since a unique flair and consistency, themes can also limit creativity for both groups. So, although this may sacrifice some level of cohesion, eliminating a theme will allow groups to dream big and allow hosts and hostesses to sing songs that showcase their talent to the fullest extent, not just one that fits within the confines of the show’s title.

ACU’s three student-led a cappella groups – Foundation, Hilltop and Grace Note – will be incorporated into the production.

While ACU’s rich a cappella tradition is showcased each year by the club and class acts, I’m hoping to showcase what our students do best by incorporating more a cappella singing into the host and hostess numbers. Starting this year, each of these three student singing groups will perform during the show.

There will be no Thursday night student performance.

In recent times, students and the ACU community have been invited to attend a Thursday night performance at a steep discount. In order to provide more practice time on stage for hosts, hostesses, clubs and classes, there will not be a Thursday show this year. However, students, faculty and staff can receive a 50 percent discount on tickets to the Friday night show. More information about these discounts will be sent to each respective group.

Ticket pricing and structure is being updated to accommodate changing audience needs. 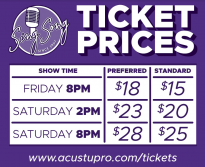 Taking a critical look at attendance over the past several years and hearing from current students and alumni who have attended the show has motivated many of these changes. This year will feature tiered pricing, with guests having the option to choose between cheaper general seats and more optimal, but also more expensive, preferred seats. Tickets prices for Friday night and Saturday afternoon’s performances will also be reduced from previous years. I hope this change will help drive up attendance to these historically less-attended shows. Tickets can be purchased online starting Oct. 15 at acustupro.com/tickets.