Dr. Jerry Taylor, associate professor of Bible, missions and ministry at Abilene Christian University, speaks Sept. 18, 2018, on the occasion of the opening of the new Carl Spain Center on Race Studies and Spiritual Action. Taylor will be director of the new center.

The man who delivered the most explosive lecture ever heard on the Abilene Christian University campus will be honored in September with the opening of the Carl Spain Center on Race Studies and Spiritual Action.
With a formal opening and ribbon cutting on Sept. 18, the center will carry Dr. Carl Spain’s name in tribute to the ACU Bible professor who took the university to task in 1960 for its admissions policy that barred African-American students. The policy was changed in 1961.
Spain, who is deceased, was a longtime Abilene Christian professor. He delivered his powerful lecture titled “Modern Challenges to Christian Morals” during the February 1960 Bible Lectureship. The ribbon cutting in Moody Coliseum will come during this year’s lecture series, now known as Summit.
None could be more pleased than Dr. Jerry Taylor, associate professor of Bible, missions and ministry, who will be director of the new center. It was Taylor who listed establishing the center as one of his faculty goals several years ago. His decision to place Spain’s name on the center seemed most fitting.
“He gave a powerful, impactful lecture,” Taylor said. “It took a tremendous amount of courage.”
The grand opening ceremonies will begin with a Summit address by Taylor in Moody Coliseum at 11 a.m. and a noon invitation-only luncheon in the Hunter Welcome Center. Spain’s daughter and grandson, Claudette Rogers of Houston and Gavin Rogers of San Antonio, are expected for the ceremonies. She will bring photos of her father and personal items, including a copy of her father’s famous speech, to add to the center. A dedication and ribbon cutting will begin at 4:30 p.m. at the center, located in Room 111 of the Bible Building.
The center will be directed by Taylor and an administrative assistant. He will continue to teach classes, but on a reduced schedule. When Taylor teaches a class on prophetic preaching, he cites Spain’s lecture as an example. It’s easy to see why.
Dr. Douglas Foster, a professor in ACU’s Graduate School of Theology, reflected on Spain’s speech in an ACU Today magazine article titled “An Angry Peace: Race and Religion.” In his talk, Spain noted in 1960 that some Methodist, Baptist and state universities admitted African Americans. He noted that no state or federal laws existed to prohibit black students and that the Bible did not rule against it.
“Why are we afraid?” Spain asked. “Are we moral cowards on this issue? There are people with money who will back us in our last-ditch stand for white supremacy in a world of pigmented people. God forbid that we shall be the last stronghold among religious schools where the politico-economic philosophy of naturalism determines our moral conduct.” 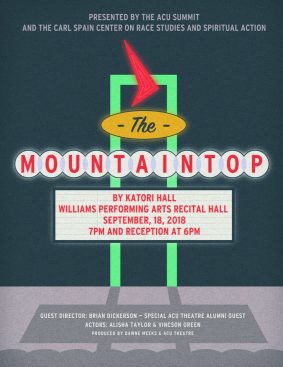 This year’s Summit will offer another moment of rejoicing for Taylor, and on the same day as the ribbon cutting. That evening, his daughter Alisha Taylor, a 2017 ACU graduate, and Vincson Green, a 2012 alumnus, will perform The Mountaintop, a two-person play depicting the last night of Dr. Martin Luther King Jr.’s life.
A reception will begin at 6 p.m. in the lobby of the Williams Performing Arts Center. The play will start at 7 p.m. in the WPAC Recital Hall. It is free and open to the public.
The new center at ACU will provide a place to advance the academic study of racism, which continues to affect all facets of the American society, Taylor said. Even if racism isn’t as overt and aggressive as it once was, it still exists.
To increase understanding, the new center will offer mentoring, spiritual retreats, conferences and lecture series. Taylor is especially fond of silent retreats like the ones he takes students to at a retreat center in South Texas. Silence “gives souls an opportunity to communicate with God,” he said.
He sees the new center as another step ACU is taking to advance the opportunities for people of all races to genuinely connect on a deeper spiritual level beneath color, class and culture. The diversity he sees on campus now makes him thankful. The opening of the Carl Spain Center will be another opportunity to rejoice over what God is doing to heal the world, he said.
“We’re thrilled about it,” Taylor said. “It’s finally coming to fruition.”

A young Jerry Taylor spent a lot of time wrestling with the same question over and over, “Why me?” An older Dr. Jerry Taylor finally got his answer. LEARN MORE
Visit the Carl Spain Center website