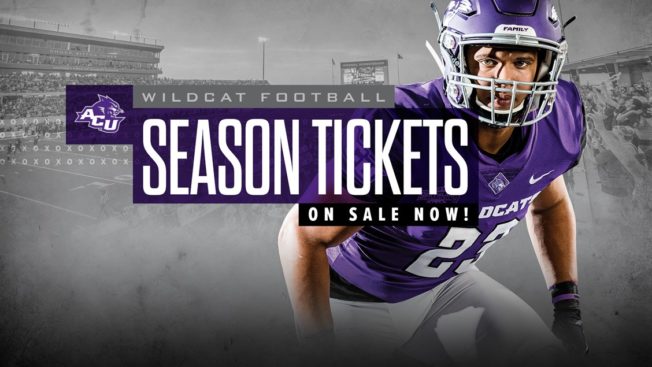 Renewals and general admission season tickets for Abilene Christian’s 2019 six-game home football schedule are on sale. Current season ticket holders are encouraged to renew by Friday, May 31 in order to secure last year’s seats, while prospective season ticket buyers can request an upgrade after purchasing at the general admission level.
The most convenient way to renew or order season tickets is by using ACU’s Ticket Central website. However, tickets may also be purchased at the Wildcat Ticket Center, now at the Teague Special Events Center, 1600 Campus Court, or by calling 325-674-CATS (2287).
“Season-ticket holders are a top priority for any athletics department,” said Steve Harrell, ACU’s Deputy Director of Athletics for External Operations, “and we want to reward their loyalty by giving them the first opportunity to keep their seats or upgrade to a better location. We’re anticipating a great season based on last year’s finish and don’t want anyone to miss out on the excitement.”
ACU won four of its last five Southland Conference games to finish 6-4 overall and 5-4 against the league, and this year the Wildcats will have six home games on its slate for the first time since 2010.
ACU’s home opener is set for Saturday, Sept. 7, when the Wildcats play host to Arizona Christian of the NAIA Sooner Conference. ACU will also welcome McNeese (Sept. 21), Houston Baptist (Oct. 12), Stephen F. Austin (Homecoming contest on Oct. 19), Sam Houston State (Nov. 9) and Southeastern Louisiana (Nov. 16).
The Wildcats additionally have a number of returning players who started at least two games last season, including four players who started all 11 contests: quarterback Luke Anthony, middle linebacker Jeremiah Chambers, outside linebacker Jack Gibbens, and offensive lineman Kade Parmelly.
New reserved season ticket orders will be taken at the beginning of June, while all single-game football tickets will go on sale in August. Seating that becomes available after the annual renewal process will be offered to Wildcat Club members on a priority basis.