Zarur De Leon-Torres is a Navy Reservist and a full-time student in ACU Online’s Master of Healthcare Administration (MHA) program.

As a Navy corpsman, Zarur worked in field medicine; a role similar to an EMT. Later, he had some specialized training in Naval dentistry, an experience that inspired him to consider becoming a dentist. With that in mind, he began taking prerequisite courses he would need for dental school.

At the time, Zarur was an undergraduate student at the University of Texas at Dallas, and his mentor had a Master’s of Healthcare Administration. Learning about her experience managing a healthcare company sparked a new direction for Zarur.

He liked the idea of working in an administrative role in the medical field, but said, “I just hadn’t known the name for it yet!”
“I had also been a banker, so communication and interpersonal skills were natural for me,” he said. “[The MHA] definitely sounded like the right fit for me.”

Choosing ACU for an MHA Degree

As a Reservist, Zarur has monthly, weekend-long training drills in Forth Worth, Texas. He also has a two-week training once per year. An online program fit this busy schedule and lifestyle.

“I can literally be anywhere. My school is my computer,” he said. “There’s no reason not to go to school anymore.”

Zarur says that coming from a Christian background and living in Texas, he always knew ACU existed. So when it came time to find the right graduate school, he added it to his list of options. But when he discovered a Naval dentist and fellow reservist had attended ACU, and then later saw ACU admissions counselors at a graduate school fair at UT Dallas, his decision was really set in motion.

He said the admissions and registration process was smooth: “Every step of the way I had someone to talk to.” 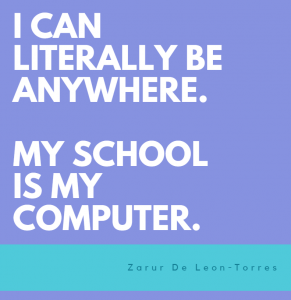 Healthcare Administration Through A Christian Lens

Zarur, who also has an associate’s degree from Richland College, was drawn to ACU Online for its Christian focus. For one, he said attending a state school for his undergraduate degree in health studies allowed him to see science in one way, while at ACU, he now can explore things from a biblical perspective. Also, in his online courses, he sees many ways to apply his faith to his studies.

“When you look at the MHA program, it involves a lot of problem-solving based on your morale,” he said. “[Instructors] will give you a problem, and you solve it or write about it through a Christian perspective. I think that’s awesome.”

Zarur believes that learning to incorporate values into your professional decisions is important preparation for work in the medical field, where he says almost every choice you make involves ethics in one way or another.

As of fall of 2017, Zarur has been volunteering with Medical City in Dallas, more specifically with ones of its contractors, Healogics. Healogics specializes in wound care, and Zarur has shadowed its director. In the future, he sees himself working as a program director for an organization like Healogics, if not for that company itself.

Building a Community, Online and Off

Zarur loves taking classes online, and says the system ACU Online uses to host its courses is well-organized and easy to use. He says the professors and students alike are constantly interacting in class. He also appreciates that most of his online classmates are also professional and responsible, something he’d expect at the graduate level. These qualities come into play when there are group projects, where collaboration is key.

Zarur says he applauds ACU’s ability to keep students engaged in and out of the classroom. For example, he said his advisor and student ambassador are always there for him. If they say they’ll call, they call.

“I know I can count on them,” he said, likening this relationship to the one he has with his fellow sailors. “I 100-percent know they will give amazing attention to detail and go above and beyond.”
***
The online MHA at ACU is helping Zarur take his medical administration career to the next level. If you’re also interested in this career path, take the first step and learn more about us today.