He was born Oct. 29, 1931, in Lincoln, Nebraska, and graduated from Eugene (Oregon) High School in 1949. Ash earned an Associate in Arts degree at Florida Christian College in 1954, and married Barbara Bailey a year later. He earned an M.A. in Old Testament from ACU in 1959, and a Ph.D. degree in church history from the University of Southern California in 1966.

For nearly 50 years, Ash researched, read, studied, lectured and wrote about noted theologian C.S. “Jack” Lewis and his essays, lectures and books. A Bible professor for more than 40 years at ACU, he also was the author of more than a dozen books. He recently completed Walking With C.S. Lewis, a 10-part video series.

“Tony was such a wonderful storyteller,” said David Swearingen, a longtime friend and former vice president of corporate communications with Johnson & Johnson. “His solid Christian faith and his passion for C.S. Lewis’ works energized him in the classroom. He could quote long passages without missing a word. In particular, he loved The Chronicles of Narnia and when he told those stories his face lit up with expressions of excitement, delight, consternation and fear.”

Ash taught Bible at ACU from 1962-72 before his appointment as a professor at Pepperdine University and chair of its Religion Division from 1972-75. He taught at the Austin (Texas) Graduate School of Theology from 1975-85 before returning to ACU. After teaching, writing, lecturing and preaching for more than 60 years around the world, he retired in 2015 as professor emeritus of Bible, missions and ministry.

“He was a legend in his own time, as a beloved Bible professor, academic and friend to countless people, and especially to his students,” said ACU chancellor Dr. Royce Money (’64). Tony and his wife, Barbara, have many spiritual children, as their lives enveloped several generations of students at Abilene Christian and at Pepperdine University. Tony’s love for God’s Word and his extraordinary ability to communicate it through teaching, preaching and writing will long be remembered by all whose lives he touched.”

Dr. Ian Fair (’68), former dean of ACU’s College of Biblical Studies, recalled a time when Ash walked unannounced into a meeting Fair was having with an alumni couple and their daughter, a prospective student. 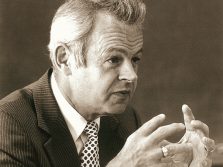 “I was trying to explain the academic advantage of attending ACU. Tony immediately recognized the couple, having officiated at their wedding more than 20 years ago,” Fair said. “He called them by name, mentioning the wife’s maiden name and their grades in his class. They were stunned. I turned to their daughter and asked, ‘What would it be like to attend a university where in 20-plus years your professor would remember your maiden name and your grade in his class?’ She decided to enroll that day.”

Aside from his lifelong commitment to students and higher education, Ash was an avid outdoorsman. He ran 13 marathons, including the New York City Marathon, and hiked the Appalachian Trail, as well as trails in Oregon, England, Wales, Scotland and Ireland.

Ash was an active member of Abilene’s University Church of Christ. Earlier, he was a pulpit minister in Georgia and California and Texas, including five Church of Christ congregations in Abilene: Central, University, South 11th and Willis, Minter Lane and Highway 36.

He was preceded in death by his parents, Jesse and Virginia (Coleman) Ash. Among survivors are Barbara, his wife of 62 years; sisters Jane Byrd, Judy Barr, Susan Anderson, Lynn Ash and Cathy Hannaford, and their children and grandchildren.

A short memorial service will be held at noon on Monday, Dec. 11, in ACU’s Chapel on the Hill. In lieu of flowers, the family prefers contributions to the Siburt Institute at ACU (online at acu.edu/giveonline or mailed to Gift Records, ACU Box 29132, Abilene, Texas 79699-9132).