You’ll be able to see it from miles away.
Driving into or around the north side of Abilene, especially at night, you’ll look toward the Hill and will see its lights illuminating the West Texas sky. You may already be used to seeing the Tower of Light from a distance, serving as a marker for campus, even a beacon. No one, however, will be able to miss Wildcat Stadium. Follow its lights, and you’ll find your way home.

The home team, home games, Homecoming – many athletics traditions are designed around the concept of “home.” Home field advantage is real: there’s just something to be said about playing on familiar ground in front of familiar fans and traditions. Home is where a group of people with a common goal return to time and again, a place where they belong.
Abilene Christian University hasn’t regularly hosted football on campus since 1942. A lot has changed in Wildcat football since then – from players wearing helmets without face masks and fans sitting on wooden bleachers at A.B. Morris Stadium, to today’s 1,600-square-foot LED video scoreboard towering over the new ever-green FieldTurf surface on Anthony Field below. The 75-year span includes 59 years of games played at Abilene’s Shotwell Stadium, which is home to the city’s high school football teams.


“This is a once-in-a-lifetime opportunity,” said Lee De Leon, ACU director of athletics. “Wildcat Stadium will inject pride, passion and school spirit on our campus unlike anything this university has experienced.”
The opening game against Houston Baptist University, coming a day after grand opening activities including a free concert for the public by rock band NEEDTOBREATHE, marks a turning point in ACU’s history. There will be no mistaking when the Wildcats will be playing. Gameday culture is here, complete with tailgating in the Campus Mall before each home game. 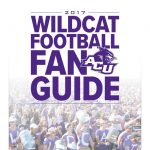 “Nothing says ‘welcome home’ like the center of campus,” said Samantha (Bickett ’01) Adkins, assistant director of alumni relations and a member of the Wildcat Stadium planning committee. “We’re still the same school, with the same values and learning experience. We’re adding something to our culture  that will build camaraderie  and community.”
“It’s not just about football,” said Jim Orr, J.D. (’86), vice president for advancement. “Wildcat Stadium has value for the entire community, from ACU to Abilene to the entire region. It’s an asset that will be a blessing beyond the borders of campus.”


This community is quite literally a dream come true for April (Bullock ’89) and Mark (’86) Anthony. The need for an on-campus stadium felt apparent when they returned to campus for 2013 Family Weekend to visit their then-freshman daughter, Ashlyn (’17). Every event planned  that weekend for families was on campus – except the football game. The same was true when they returned for Homecoming.
As she told ACU Today in 2014, April Anthony leaned over to president Dr. Phil Schubert (’91) during the Homecoming game and said, “I sure am tired of driving down the street from campus to get to the football stadium.” The Anthonys soon decided to make a cornerstone gift to build the stadium as part of ACU’s Vision in Action initiative and as a way to help build pride and participation among football fans.
“ACU is in our DNA and we are proud to be ACU graduates,” Mark Anthony said at the groundbreaking ceremony  Feb. 19, 2016. “We believe in having a first-class facility that matches the quality of our faculty, our staff and our students here on campus.”

“As a student-athlete, I know how awesome it is when you feel the support of your community. … I’m excited about starting new traditions and introducing the ACU community to fun opportunities. I want to see some Wildcat pride.” – Sophie Morrow, member of the women’s track and field team

Wildcat Stadium’s grand opening comes about a month after the NCAA will vote on finalizing ACU’s transition to Division I affiliation, meaning teams will be eligible in 2017-18 for all Southland Conference and NCAA postseason tournaments. The move to Division I has brought an increased focus on academics among student-athletes, who are held to higher grade and graduation-rate standards than the Wildcats’ time in Division II.
The Division I transition, coupled with the presence of Wildcat Stadium and all the Gameday activities, helps better integrate student-athletes into the campus culture. Athletics has the unique ability to unify a diverse community, De Leon said.
“As a student-athlete, I know how awesome it is when you feel the support of your community,” said Sophie Morrow, sophomore communication disorders major from Hico, member of the women’s track and field team and a student director helping plan Gameday activities. “What’s not to get excited about these days at ACU? With construction finally finishing on many projects, I’m excited about starting new traditions and introducing the ACU community to fun opportunities. I want to see some Wildcat pride.”

Appropriately, the theme for Homecoming 2017 is “The Cats Are Back,” with several events involving the new stadium. But that weekend, like ACU itself, will be a mix of familiar and new, from Homecoming Chapel to the parade to reunions spanning the classes of 1972 to 2012. Surely a balance can be found between the two, said Craig Fisher (’92), director of alumni relations and university relations.
“It’s a different time and a different generation, but the core of the university is the same,” Fisher said. “We always want ACU to be a place people of all ages call home.”

THE CATS ARE BACK: See the complete Homecoming 2017 schedule