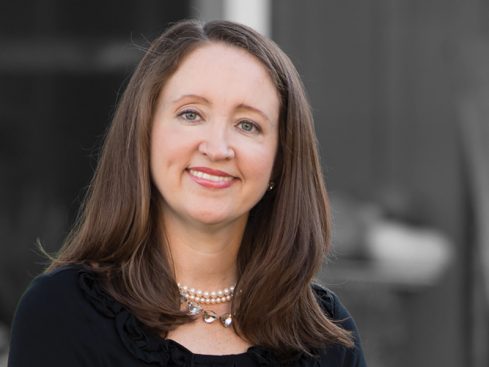 Chelsea (Thornton ’01) Buchholtz, J.D., still can’t believe she’s ACU’s 2017 Young Alumna of the Year.
Just look at the previous recipients of the award, she told attendees at the Alumni Day lunch Feb. 19: 2016’s Gilbert Tuhabonye (’01), an inspirational speaker, author, running coach and philanthropist; and 2015’s Dr. Kent (’03) and Amber (Carroll ’06) Brantly, known for their work combating the Ebola virus in West Africa. Kent Brantly appeared on the cover of Time magazine and on NBC’s The Today Show.
“The Today Show hasn’t called me,” Buchholtz joked as she accepted the award. “I sit in meetings and manage people all day.”
The chief of staff for the Texas Juvenile Justice Department (TJJD) does a bit more than that, as was clear from who came to pay tribute to her at the ceremony: Jeffery Boyd (’83), justice on the Texas Supreme Court. The two worked together in Texas Gov. Rick Perry’s office before Buchholtz moved to the justice department, where she serves as an advocate for the department’s employees who work with the children in the juvenile system.
Buchholtz majored in advertising and public relations at ACU and earned her juris doctor degree from Pepperdine Law School. Her California days, however, had her longing for Texas. She interned for Gov. Perry – she previously had interned for former U.S. Rep. Charlie Stenholm and Sen. John Cornyn – and eventually worked for four years as Perry’s general counsel. She then moved on to serve as one of his policy advisors and chaired the transition team overseeing the merger of the Texas Juvenile Probation Commission and Texas Youth Commission into the TJJD.
When the sitting executive director of the TJJD called the governor’s office looking for lawyers, Boyd recommended Buchholtz. There, she has moved from deputy general counsel to general counsel to chief of staff.
“That kind of success does not come easy in state government,” Boyd said. “The fact that Chelsea was able to move so quickly into her leadership roles attests to her character and effectiveness, and her ability to gain the trust and response of those with whom she works and leads.”
The creation of the TJJD was part of an overhaul of the entire system, which had been plagued with corruption scandals, high turnover and low morale. She describes her primary goals as ensuring the department is trustworthy and creating a culture of healing and positivity among its workforce.
“I really was drawn to the challenge of completing those reforms and helping this organization be healthy and robust and one in which the legislature would have confidence,” she said. “I support those who support the kids in our system. I make sure they can do their jobs well. I want others to be able to trust in me and my instincts and know I will do my very best to do right by people.”
She has come full circle in many ways and certainly is in her element in Austin. Not many people can say that as a child, they used to hang out with the late Jack Pope, J.D. (’34), former chief justice of the Texas Supreme Court. [Her father, Gary Thornton, J.D. (’72), clerked for Pope.] “Even as a Texas Supreme Court Justice he let me, as a 3-year-old, dance on his big fancy desk and comb his hair,” Buchholtz said. “And he instilled in me the belief that even the most important people can stop and love on children, just as Jesus did.”
Being a member of the Jack Pope Fellows Program at ACU helped teach her how to be a public servant, she said, and she credits others at ACU including Dr. Gary (’64) and Sylvia (Ravanelli ’67) McCaleb for showing her what leadership looks like.
“This award is really not about me at all,” she said. “It’s a reflection of my world, my circle of love.
“Starting out at ACU, where so many beautiful Christian influences mold you, allows you to go out into the world and have the tools to model Christ,” she said. “That’s my foundation.”