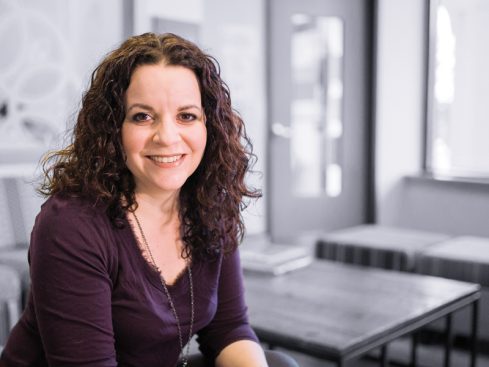 He was there every day. Tasha (French ’02) Lemley walked past the same bench every morning on her way to work. Day after day, the same homeless man was sitting there as she hurried by. She had graduated from ACU with a photojournalism degree, but had become interested in graphic design, moving to Nashville to look for work. But so far, she had only managed to land a job at a downtown Kinko’s.

“I did not have a good attitude about that,” Lemley said. “I didn’t move to the big city to work at a copy store.”

And every morning, he sat as Lemley quietly walked past him.

“Because I perceived him as different, it never occurred to me to talk to him,” she said.

Lemley resolved to change this, and the next day she approached the man, and in a shaking voice said, “I’m Tasha.” He replied, “I’m Don.” The moment changed both of their lives. Through her interaction with Don, she got to know more homeless people.

She eventually found work as a designer, art director and communications coordinator in and around Music City. By 2007, Lemley had an idea to start a “street” newspaper in Nashville with content focusing on the homeless community and poverty-related issues. From her journalism classes at ACU and her experience with The Optimist and photography, Lemley began The Contributor, a newspaper featuring the writing and other contributions of members of the homeless community.

The Contributor started as an every-other-month publication, eventually became a weekly newspaper providing income, independence and a voice to many. Lemley and her staff discovered that after 90 days of selling newspapers, vendors (homeless people who sell the copies) were able to get into housing. Today, 6 million copies of The Contributor have been sold, and some of the content has won national and international awards from the International Network of Street Papers.

Eventually, Lemley realized something else The Contributor was doing. The newspaper was providing what introduced her to Don and other homeless Nashvillians in the first place: face-to-face interaction between homeless and non-homeless people.

“It was changing lives on both sides of that socioeconomic divide,” she said.

When Lemley realized her role as executive director had taken her away from that interaction, she stepped down from the job.

On a trip to India, she and her husband, Mark (’00), fell in love with authentic Indian chai, and after returning home, learned how to make it themselves. She remembered how the homeless people of India make and sell chai on the streets, so why not make this opportunity available to those in Nashville? In 2013, Tasha and Mark launched Chai Wallah, a tea-based social enterprise producing a chai concentrate sold to coffee shops primarily by homeless women. And now she is working toward empowering refugees through a food-service training program.

Lemley initially moved to Nashville determined to get a job in graphic design. But through the homeless community there, she realized her skills could be used for much more.

“That is something that has been really amazing to me,” said the 2011 winner of a JMC Gutenberg award for distinguished career achievement. “I made my living from my education, but not from the name of my degree.”