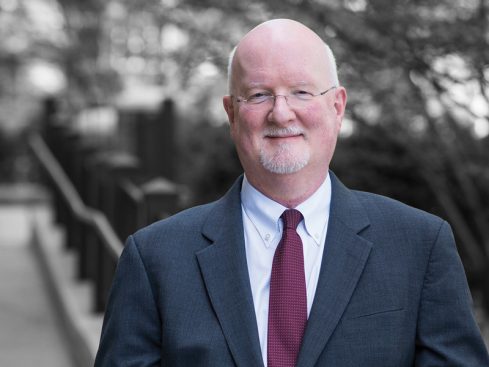 When Dr. Shaun Casey (’79) was growing up, family conversation around the dinner table often centered on two topics: religion and politics.
“I’ve always been intrigued by the public implications of religious belief and practice,” Casey said. “For a lot of Americans, belief is a matter of consumer choice. But I’ve always thought there was more than that. There also are public implications.”
On July 1,2017 Casey began a new position as director of the Berkley Center for Religion, Peace and World Affairs at Georgetown University.
This is the most recent step in Casey’s decades-long career of bringing together faith and government. Through his roles at Wesley Theological Seminary, the Center for American Progress and the Center for Strategic and International Studies, Casey has been able to confront issues in academic and political arenas that he believes Christians are called to address.
During the Barack Obama administration, Secretary of State John Kerry invited Casey to establish the Department of Religion and Global Affairs in the U.S. State Department. Casey’s responsibilities included advising Kerry when religion cut across his portfolio – which Casey said happened on the majority of the issues – and increasing the capacity of the State Department around the world to sense religious dynamics.
“Our diplomacy can be smarter if we understand how to interpret religion,” Casey said.
Casey described his four years in the State Department as “amazing.”
“I worked for a Secretary of State who called us to fight extreme poverty and work for human rights,” he said. “He called us to reduce conflict around the world and promote peace, and that’s not a bad occupation to have.”
As a student at ACU, Casey received an education providing an ideal springboard for eventually continuing his education at Harvard University’s John F. Kennedy School of Government and Harvard Divinity School. He learned to write in the journalism classes of Dr. Charlie Marler (’55), while Drs. LeMoine Lewis (’36) and Thomas Olbricht taught him how to think theologically – and encouraged him to attend Harvard for graduate school.
“When they said they thought I could go to Harvard, I trusted them,” Casey said. “It was a little scary going from West Texas to Harvard at 22, but I realized that no one is the smartest guy in the room all the time. I learned how to learn collaboratively at ACU.”
In his new position at the Berkley Center, the premiere organization of its kind in the world of religion and politics, Casey will lead a team of scholars who research and write on ethics and global affairs.
“The Berkley Center wants to promote peace, train a new generation of leaders, understand poverty, promote human rights, and address global refugee crises and climate change,” he said. “We are an academic research center, but ultimately we want to effect change on the ground all around the planet.
And the center has a great perch here in Washington to shine a bright light on these issues.”
– DEANA NALL