Aaron Watson (’00) is singing up a storm on the cover of the new Summer-Fall 2017 issue of ACU Today magazine, which mailed this week. From performing at the Grand Ole Opry, to headlining major concerts, to growing a worldwide fan base, Watson is an act the country music business can’t ignore.
Watson may have hit the big time, but people in Abilene are just as likely to see him in the grocery store, at church and at events around town in which his three kids are involved. Aaron is married to ACU alum Kimberly (Calkins ’01), and the Watsons are happy to continue to call the Big Country home. His career takes him far and wide to perform, record and promote his music, but always returns him to Abilene and his West Texas roots.
Our photos on the cover and the opening spread are by talented photographer Bradford Coolidge of Boerne, Texas, whose concert images document some of country music’s biggest and up-and-coming stars. (READ THE STORY)
Other content in this issue: 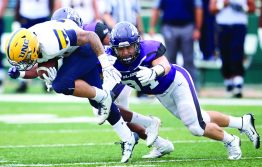 ‣ Are you ready for some football? We devoted 14 pages this issue to a handy guide for new Anthony Field at Wildcat Stadium, which debuts Sept. 16 as ACU’s first on-campus football venue in more than half a century. Be sure to read up on the new traditions being planned as the campus prepares to reinvent Gamedays this fall, building community and supporting the Wildcats as never before.
‣ An inside look at the new Halbert-Walling Research Center, one of the five major facilities built by the Vision in Action initiative.
‣ Profiles of 2017 alumni award winners: David (’82) and Laurie (Stallings ’81) Vanderpool, Outstanding Alumni of the Year; Chelsea (Thornton ’01) Buchholtz, J.D., Young Alumnus of the Year; and Distinguished Alumni Citation winners Dr. Shaun Casey (’79), Tasha (French ’02) Lemley and Kevin Starks (’98).
‣ A celebration of Dr. John Willis (’55), who is retiring after a 61-year career in Christian higher education, 46 of them as a professor in ACU’s College of Biblical Studies.
‣ An early preview of the schedule for Homecoming (Oct. 19-22).
‣ An ACU 101 salute to the Big Purple Marching Band and its colorful musical history.
‣ A 10 Questions Q&A with Mike (’90) and Michelle (Kehoe ’90) Patterson of Rockwall, Texas, who chronicle the ins and outs of putting their lives back together after a 2015 day-after-Christmas tornado destroyed their North Texas house.
‣ A tribute to the late Wendell Broom (’45), a missionary pioneer, mentor and ACU educator who died in February.
‣ Our Second Glance essay by Nathan L. Hecht, J.D., chief justice of the Texas Supreme Court, recounts the influence of the late Jack Pope (’34), a former chief justice and legendary figure in Texas law.
Watch this blog in the days to come for backstories of some of these major articles.