Brandi Jo (Magee ’06) Delony was official photographer for an ACU alumni missions trip to LiveBeyond in January 2017. She and her husband, Scott (’06), both work for Abilene Christian University and run a nonprofit in their spare time called Kaleidoscope Media Ministries that offers professional photography and video services to other nonprofits. Above are some of Brandi Jo’s photos that capture the heart of the LiveBeyond mission to transform Haiti for the Kingdom of God. She explains why each image is meaningful to her.

LiveBeyond clinic is often the difference between life, death 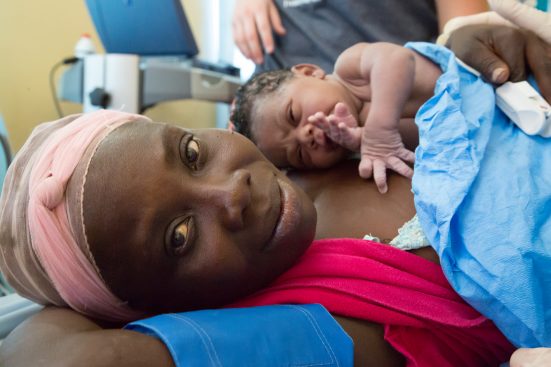 Neither Brandi Jo nor Scott were expecting the dramatic moment they would witness at the medical clinic.
Marigele, one of the women enrolled in the maternal health program, had walked five miles to the clinic while in labor. Her water broke at the clinic, and she gave birth to a healthy baby boy – but not before some harrowing seconds. The delivery was complicated by shoulder dystocia, and the umbilical cord wrapped twice around baby Jameson’s neck. Had she delivered Jameson at home, as most Haitian women do, she and her baby likely would have died, the Delonys were told later.
Brandi Jo had never witnessed childbirth and was a bit apprehensive, but soon was caught up in the moment. “As the birth was happening, they ended up realizing the baby’s shoulder was stuck. It was kind of fast paced,” she said. “It was very exciting for me to be a small part of this experience with her and her son, and all the ACU students and LiveBeyond staff. I remember when he was born and they laid him on her chest I was hoping to get a couple of shots of her – just the look she gave me, she was so content.”

LIVING BEYOND: David Vanderpool, M.D., (’82) and his wife, Laurie (Stallings ’81), have been doing volunteer medical work in third world-countries for more than 22 years. But their experience in the aftermath of a major earthquake in Haiti was different. In fact, it changed the course of their lives.

HEARTS LOST TO HAITI: Meet some of the Haitians whose lives have been impacted by LiveBeyond, including a former voodoo priestess who was baptized in July and the wife of a voodoo priest whose grandchildren became the start of the Kè Pou Timoun children’s program.