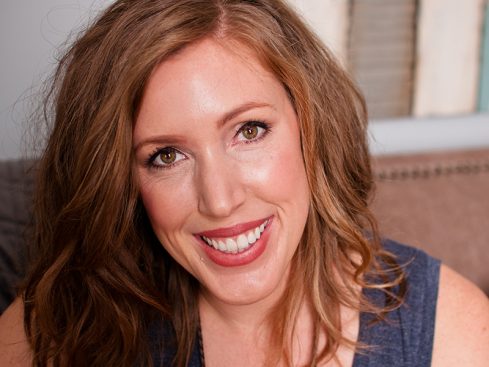 Andrea Lucado got up at 5:30 a.m. on a Monday and started writing. What started as a stream-of-consciousness essay became memories of her time studying in Oxford, England. The first person she sent the essay to was her father, international best-selling author Max Lucado, also an ACU graduate.
“He’s my dad but he would also say if something was not good,” Andrea said. “Seeing him [go through the process of writing and publishing] made it less of this mysterious business.”
Through her father, Andrea had connections to an agent and other influential writers, but she didn’t want to sell a book based on his popularity. She had hoped to be married and have a different last name by the time she published a book, she said. Yet her first book, English Lessons: The Crooked Path of Growing Toward Faith, was released in May 2017 with the name “Lucado” printed on the spine.
“It was a good thing for me to do that and get over myself – to realize that I need that name,” Andrea said. “You need a platform these days if you want to get a book published.”
At the same, time, she added, she is more than just a familiar name. Though her father helped her with the tools and encouragement she needed to publish, she had to find the words to say on her own.
When she first came to ACU, Andrea studied journalism like her father had in 1977, but quickly realized she wanted to be more creative than journalism allowed so she switched to English. She discovered her own writing voice when she took a creative nonfiction workshop with Al Haley, professor of English and ACU Writer in Residence.
“He had us write two essays in the class, and I just remember feeling like ‘Oh, I’m really able to express myself with this,’ ” Andrea recalled.
She studied abroad in Oxford, England, during her junior year, and the experience inspired her to earn her master’s degree in English literature at Oxford Brookes University.
While she was there, she met a fellow student named Ben. He was really nice, and she said she was surprised to find out he was a staunch atheist. For the first time in her life, she was the only Christian in her class. She had always been told that people would look at her Christian life and want what she had. But these friends didn’t seem to care about her faith. She began to have her own doubts.
“They’re all fine, functioning human beings without God and without someone that they’re praying to,” Andrea said. “I feel like non-Christians should struggle more, and they weren’t.”
The yearlong experience resulted English Lessons. In the book she reflects on her experiences growing up in the church and then going to a place where she is surrounded by many different perspectives as well as philosophies that challenge long-held assumptions about faith.
Her classmates became characters in her memoir, each with a pseudonym to protect their privacy. Each one, except Ben, who allowed Andrea to use his real name.
“Ben was so great about the book,” Andrea said. “He’s in the chapter, ‘The Atheist Society.’ I went to the Atheist Society with him and he came to the Christmas Eve service at the church I was going to.”
As she wrote about those experiences, she said she found perspective about the doubts she struggled with in Oxford. But the act of writing also provided perspective about her identity. At one point during the writing process, a friend asked if she might be subconsciously writing for her parents. After that, Andrea stopped sending the book to her parents until she felt like she could write independently, focusing on the message and impact of her book rather than what her parents would think.
Haley was impressed by the imagery in her writing. “There’s a whole chapter about riding bicycles,” he said. “The headlight keeps going out on her bicycle and she has a friend, his works, and she follows behind to get home. It becomes a metaphor for how you need somebody else to be your equivalent of a headlight.”
Andrea had many “headlights” on the path to writing English Lessons. From her first creative writing class with Haley, to the encouragement of her parents and support from Ben, Andrea found her own writing voice to tell her story.
“What people should hope to get out of this,” Haley said, “is somebody testifying really honestly and articulately and poetically about how does one sustain belief in a world that seems to have all these other answers and it seems like they get along just fine.”
English Lessons was released May 2 by WaterBrook Press and can be purchased here.
Andrea Lucado graduated from ACU in 2008, where she participated in Sing Song and intramurals with Sigma Theta Chi, wrote for the Shinnery Review, ACU’s literary magazine, and even took voice lessons for fun in the music department. After earning her master’s degree, she worked as an editorial assistant at Harper Collins Publishing and did freelance writing for magazines and websites. She now lives with one of her best friends from ACU in Austin where she speaks at events and writes for She Reads Truth and Relevant magazine.