Home/ ACU News/ Sports/ Lost Lobo: ACU says goodbye to the Wolf
Main Content
Features Academic News Alumni News Campus News ACU Online All Categories
Academic News ACU News ACU Online ACU Remembers Alumni News Campus News Faculty Spotlights Features Graduate Programs Research Sports Student Experience Student Spotlights Student Success Undergraduate Programs Why ACU?
The old guard came home to huddle one last time around the one they called Wolf. To do for him, once and for all, what he’d never done for himself.
Jerry “Wolfie” Wilson (’71) died April 25 at the age of 69 after a brief battle with cancer. His nickname came from Ron Willingham (’54), whose work in leadership development with the ACU football team, among other contributions, earned him induction into the ACU Sports Hall of Fame last year. In a session with players in 1968, he asked each to introduce himself. He thought Wilson said “Wolf.” The moniker stuck. And so did Wilson.
His resume says he played football at Abilene Christian University for Wally Bullington (’53) from 1968-70 then became an assistant for him and five other ACU head coaches in three different decades. And that he was also the Wildcats’ head baseball coach from 1973-75 and coached football at a handful of high schools across West Texas.
But it doesn’t explain what brought, by the dozen, men he had led into battle on gridirons and diamonds for nearly 30 years and across multiple generations back to Abilene this week to say goodbye through tears. To understand that, you might have to get in the car for a 1,200-mile round trip from Abilene to Greenville, Miss., the very voyage Wilson made each Thanksgiving and Christmas during the mid-1970s to make sure the Montgomery boys were home for the holidays. 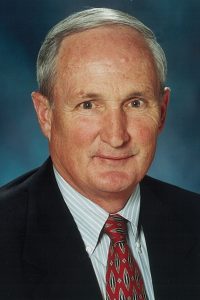 “Those drives back and forth were special to me,” says older brother Wilbert (’77), whose 76 touchdowns made him ACU’s career leading scorer. “I think about those drives a lot, especially now when I’m taking my kids different places. I think about Jerry driving me and [younger brother] Cle (’78) up and down the road and leaving his family behind. The time he gave up to make sure that we were happy tells you everything you need to know about Jerry Wilson.”
Or grab a spoon and notepad and sit in with the coaches for an all-day film session, week after week, the way Wilson did with his fellow ACU Sports Hall of Fame member Don Harrison (’75) when they coached together.
“Most coaches watching film would be surrounded by beer bottles,” Harrison laughs. “ ‘Wolfie’ and I would have empty cartons of Blue Bell ice cream. On Sundays, we’d go to the Bean and get all their leftover brownies and potato chips and munch on those while we broke down the tape of the next week’s opponent.”
As a graduate assistant fresh off the playing field, Harrison was devouring more than the snacks.
“I didn’t know how to be a coach, so I watched Jerry,” he recalls. “How to chart film, how to recruit – making relationships over the phone over and over. And the characteristics of loyalty and dedication and work ethic; I learned that from Jerry Wilson more than anyone else. And that has served me well the rest of my life.”
Or maybe to understand why Wilson was so beloved you need to get up in the middle of the night when you think no one is looking to do something for someone else.
“I rolled back in to campus from playing Kingsville around 3 a.m. one morning, and there was Jerry,” remembers ACU head baseball coach Britt Bonneau, who delivered a moving tribute Wilson at Tuesday’s memorial service. “Even though the city was under water rationing restrictions, he’d decided to reseed the bare spot between the two fields before spring football started. You couldn’t run sprinkler systems but were allowed to use a hose during certain times of the day. So there he was, at 3 a.m., hand watering the grass.”
All the while, Wilson was planting and watering seeds of faith in players and coaches, including Bonneau. As Wilson began to succumb to the effects of dementia in recent years, baseball became a fountain of his youth where plays and players of old would splash along the banks of his memory. Bonneau made him an honored guest at practices and games and had him throw out the first pitch at a game at Crutcher Scott Field on Feb. 28. When Wilson was hospitalized after his cancer diagnosis in February, Bonneau visited him often to talk baseball and to say thanks. He was with Wilson the day before he passed.
“I’m so glad that yesterday I got to spend … to spend …” Bonneau’s voice cracked in a pregame radio interview just an hour after news of Wilson’s death reached the dugout. “Got to spend a morning with him. Talking about a big win we had Sunday and holding his hand and getting a little response out of him. He never missed a practice. He loved being out here and being part of the team. And the guys loved being around him.
Some are legends because of what they achieved in a single moment. Wilson became a Wildcat hero in miles and meals and months. The hard way has no shortcuts.
Dub Stocker (’74) played with Wilson, then played for him. When I asked what made Wilson special, he answered with a question of his own: “Who have you ever known who gave like he did?” queried Stocker, one of many who traveled long distances to visit Wilson in his final days. “No one. He gave and never once wanted anything in return.”
It’s possible Wilson never wanted anything because of what he felt like he already had. Born in Sausalito, California, and raised in Big Spring, Texas, Wilson found family at ACU – literally and figuratively. He married Diane Stevens (’70) and, thus, joined one of the university’s most influential clans. Diane’s father, Dr. Clark Stevens, was the chair of the ACU biology department; her uncle, Dr. John Stevens (’38), was Abilene Christian’s eighth president. Football connected Wilson with all-time ACU great Bullington, his head coach and first boss. He was grafted into the assistant coach fraternity alongside men like Don Smith (’53), Ted Sitton (’54) and K.Y. Owens, whose focus on building men helped build a national powerhouse.
“He’s everything ACU is about,” says Bonneau. “A true believer in teaching young men how to grow up one day to be Christ followers. I don’t know how many people have impacted my life like he did.”
The ultimate self-demoter, Wilson often characterized his career in coaching as having never worked a day in his life and described his half-century association with ACU by saying he was the luckiest man in the world.
‘Wolfie’ was wrong. We were the lucky ones because we knew him.