For someone with an impressive clientele of world-class athletes and products to his credit, Nike’s Tobie Hatfield (’87) keeps a bit of a low profile.


That changed a bit with our new issue of ACU Today magazine, which takes a look at the “Master Maker” whose work as senior director of athlete innovations at Nike has helped a who’s who of the sporting world make headlines. A short list includes Michael Johnson, Mary Decker Slaney, Troy Polamalu, Maria Sharapova and Tiger Woods, among others.
Hatfield, the son of a legendary Oregon high school and Olympic track and field coach, was one of the stable of standout vaulters tutored by Don W. Hood (’55) at Abilene Christian University for more than three decades. Wildcat teams on which Tobie competed won NCAA Division II national titles in 1984, 1985 and 1986, and he was an assistant coach of ACU teams winning national championships in 1987 and 1988.
The writer of Hatfield’s profile – former longtime sports information director Garner Roberts (’70) – was a natural for the assignment. Roberts is a member of the ACU Sports Hall of Fame who chronicled Hatfield’s accomplishments when Tobie was a student-athlete at the university. 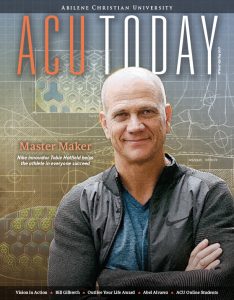 Our front cover featuring Hatfield was illustrated by Ron Finger of Brainerd, Minn., an award-winning artist who also produced the Spring-Summer 2015 cover portraying Kent Brantly, M.D. (’03).
The feature concludes with a look at ACU’s Maker Lab, which director Dr. Nil Santana (’00 M.S.) describes as “a place where innovation and creativity converge.” The venue, housed on the first floor of the John and Ruth Stevens Wing of Brown Library, helps learners of all ages develop innovation skills, whether local elementary school students or graduate occupational therapy program students from ACU.
PREVIOUS POST   NEXT POST
SHARE: