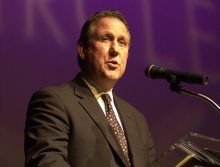 Several Dallas-area businessmen and ACU alumni are spearheading an effort to honor the legacy of the late C.E. “Doc” Cornutt (’71) at the university he loved.
Cornutt, former Abilene Christian University trustee and board chair, died in Dallas in 2016 after an extended illness shortened his life and career of service. Among survivors are his wife, Linda (Core ’70) Cornutt; daughters Sara (Cornutt ’99) Boucher and Shelly (Cornutt) Goguen; a son, Chris Cornutt (’01); a sister, Molly (Cornutt ’71) Goodwin; and a brother, Dr. James Cornutt (’72).
Having made such a significant impact on the Dallas community, as a leader and philanthropist, his friends wanted to honor not only his achievements but who he was as a person, said Jim Orr (’86), J.D., vice president for advancement at ACU.
They are building support for the C.E. “Doc” and Linda Cornutt Endowed Scholarship, which benefits students in the College of Business Administration (COBA). Gifts to the scholarship from friends and fellow ACU alumni so far total approximately $125,000, with the goal of reaching $200,000.
“Doc and Linda exemplify our mission of educating students for Christian service and leadership,” Orr said. “They are widely admired, and it speaks highly of them and the university that people not affiliated with ACU would support our students as a way of honoring their friends. They can see the difference our alumni make in the world.”
Cornutt’s career included time as executive vice president of Woodbine Development Corporation; chair of Hunt Oil Company and Hunt Refining Company; president of Hunt Realty Corporation and Hunt Financial Corporation; and chair and CEO of Argent Property Company.
He served as a trustee of Abilene Christian from 1989-2010, including three years as board chair (2007-10). He co-chaired the university’s $100 million “To Lead and To Serve” and its $150 million Centennial campaigns, received a Distinguished Alumni Citation in 2005, and chaired the COBA Advisory Board.
Chancellor Dr. Royce Money (’64) worked closely with Cornutt during his tenure as ACU’s 10th president.
“Doc Cornutt had a passion for many things – his family, his church, his business career, and certainly on that list, Abilene Christian University,” Money said. “He gave generously of his time, his abilities and his resources so that many who follow him might have the same ACU experience that so profoundly shaped his life.”
ACU’s endowment is managed by an award-winning investment team, and every year, a portion of the interest generated from the endowment provides money for numerous programs and scholarships such as the one named for the Cornutts. (Click here for a list of endowed scholarships.)
As of Dec. 31, 2016, ACU has received $189 million in endowment gifts while disbursing $274 million in scholarships and other funding. The endowment has a value of $386 million.
“Funding or contributing to an endowed scholarship is a great way to honor a loved one that also will make a difference in generations of students’ lives,” Orr said.
To learn more about the C.E. “Doc” and Linda Cornutt Endowed Scholarship or how to contribute, please call Jim Orr at 325-674-2659 or make a gift online here.