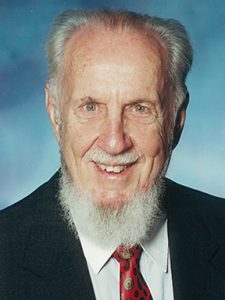 Beautiful Feet. That was the theme of the World Missions Workshop when Wendell Broom (’45) brought it to the Abilene Christian University campus in Fall 1972. Footprints painted on sidewalks across the campus led students and visitors to Moody Coliseum.
Broom died Saturday, Feb. 18, 2017, in Dallas at age 93, but his footprints can be found around the world in the mission fields where he served and in the lives of thousands of churches, missionaries and native preachers who were influenced by his life, work and pioneering development of missions as an academic program.
Services honoring his life are Saturday, Feb. 25, at 2 p.m. at Lake Highlands Church in Dallas (9919 McCree Rd., Dallas, Texas 75238).
Broom was born April 6, 1923, in Oklahoma City, Oklahoma, to Benjamin R. and Gladys Broom. He grew up there and attended Freed-Hardeman University, earning an associate’s degree in 1943 and a bachelor’s degree in history from ACU two years later, the first member of his family to graduate from college.
While a student at Freed-Hardeman he met Betty Billingsley (’45), who also came to ACU. The couple married after graduation and began their lifetime of service to the church in Wilmington, Delaware, and Philadelphia, Pennsylvania, before accepting a call to the Nigerian mission field where they served from 1955-60.
When the Brooms headed to Delaware, they took all their possessions in the back seat and trunk of their 1936 Chevy. Five years later when they moved to Nigeria they took their first four children – Wendell Jr., Mary Beth, David and Margaret – moving to a home with no electricity where water was hauled from a nearby river and meals were prepared on a wood-burning stove. Kathryn was born while they were there. Working with other mission families who joined the work, churches were planted, Nigerian ministers were trained and a fledgling Bible school begun by Broom’s predecessor, Howard Horton, in 1954 eventually grew to become Nigerian Christian Bible College.
Upon returning to the U.S., the Brooms resumed their work with Elsmere Church of Christ in Delaware and then three years with Keeaumoku Street Church of Christ in Honolulu. After completing an M.A. in church growth from Fuller Theological Seminary, the Brooms moved to Abilene where he worked with Dr. George Gurganus to build the first missions department among schools affiliated with the Churches of Christ.
As an ACU faculty member, Broom sponsored student mission organizations and taught annually in the Summer Seminar in Missions and Student Missions Workshops. He led the faculty spiritual reaffirmation in 1976-77 and conducted church growth studies of churches in Nigeria, Ghana, Kenya, Ethiopia, New Guinea, the Philippines, Thailand and Hungary.
In addition to his faculty role at ACU, Broom taught summer or extension courses in missions at Nigerian Christian Bible College, Harding University, Pepperdine University, Ghana Bible School, Nairobi Great Commission School, and Addis Ababa Bible School in Ethiopia.
ACU professor of Old Testament Dr. Mark Hamilton (’90 M.Div.), said Broom was one of the rare people who exude faith, hope and love in every encounter of their lives.
“Whenever you were with him, you felt a sense that grace was a reality, not just up in heaven, but here on earth, too,” he said. “My wife and I first knew Wendell and Betty Broom when were students at ACU and part of a group of 15 who spent Fall 1987 in Jerusalem under their tutelage. Like countless others who call them friends and mentors, we came to think of Wendell and Betty as heroes of faith. True, his taste in clothing was highly questionable, but even the loud shirts and flashy shorts proclaimed his total comfort with himself and trust in you. He felt no need to impress anyone, yet we all held him in reverence. I can still picture him leading our group up Mount Sinai just before dawn, with his staff in his hand. It was hard not to think of Moses and the people of Israel.”
“I hope to live my life one half as well as Wendell lived his. That would be enough,” said Hamilton, whose wedding to Dr. Samjung Kang-Hamilton (’88 M.R.E.) was officiated by Broom.
Broom served as an assistant professor of missions until his official retirement in 1988 but continued to teach missions classes until 1992. The next January he left for six months of teaching in Siberia. In “retirement” he continued an active teaching role in the mission fields, traveling to China, Kenya, Zimbabwe and the Pan American Lectures. He and Betty took each of their 11 grandchildren on international trips.
In 2001, ACU Press published 100 Years of African Missions: Essays in Honor of Wendell Broom. In that volume, Dr. Gailyn Van Rheenen, professor emeritus of missions, wrote an essay titled “Archery, Dentures, and Eagles: Missionary Metaphors of Wendell Broom,” an exposition on Broom’s gift for drawing fresh metaphors to clarify biblical priorities.
“His sermons take abstract concepts and give them soul and life,” Van Rheenen wrote. “ … helping us see beyond ourselves and our human dilemmas to tangibly grasp allegiance to God, the priorities of the Christian faith, and distinctive ministries in God’s kingdom.”
One of the most memorable metaphors began with a question:

“What do your children want to inherit from us when you die? Do our children want our false teeth? Our cane or walker? Do they want the medicines we need to survive? … Or, do they want the things that have brought us joy?”
“If our religion is something that we endure so that we will not burn in hell eternally, our children won’t necessarily want that inheritance. On the other hand, if Christ is our greatest pleasure, if doing God’s will is what makes us feel alive, if God’s Spirit is something we just can’t get enough of then that is what our children will want for an inheritance.”