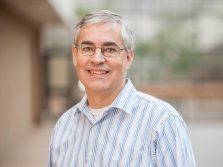 Dr. Jeff Childers of the Graduate School of Theology at ACU has been invited to present research at the conference, “Tradurre Tradire Tramandare—Translate Mislead Transmit: The Greek Fathers Between Latin Western and Syriac Eastern Worlds.”
The conference will take place February 20-21, 2017 at Università Tre in Rome. As a guest of the university, Childers will present research on the topic, “Finding a Voice for Chrysostom: the Syriac Versions of a Greek Preacher.”
“Chrysostom was the most popular preacher in the ancient church. He wrote in Greek, but his interpretations of scripture were translated into Syriac very early,” explains Childers. “My research shows how Syriac translators naturalized the Greek orator into a ‘native’ semitic speaker through the art of translation.”