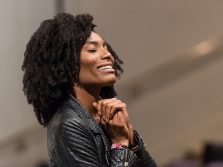 Jasmin Richardson (’09) transforms into many characters as she presents herself on international musical tours, cruise ships and most recently as the face of Clinique. But while she takes on each role, Jasmin stays genuine – faithful to herself and her convictions in the ever-changing world of performing arts.
“Acting is just honesty in the given circumstances,” Jasmin said.
After graduating from ACU in 2009, she performed on a cruise ship for two years. She then moved to New York City and began auditioning for Broadway roles. Since then, she has traveled the world as the lead in national and international tours of Memphis and Dreamgirls.
Jasmin’s training at ACU helped her understand circumstances and context of the characters she played so she could perform at her best. She said her professors gave her the basic tools to be truthful, whether acting on stage or on camera. She turned down several roles in shows that were provocative or crass solely for entertainment value.
“It just doesn’t fit with my beliefs, and they don’t serve any purpose,” she said.
Genuine faith and honesty may have meant turning down some roles, but through her honesty, Jasmin gained a role she hadn’t expected.
In 2014, she auditioned with a friend for a Clinique advertising campaign. All Jasmin and her friend had to do for the audition was say what they liked about the company’s makeup.
“It was all about being ourselves, how you are with your girlfriends,” she said.
In addition to her roles in musical tours, Jasmin recently booked a Lifetime TV show episode.
While she constantly plays different roles and embodies different people, her foundation of honesty remains unshaken, allowing her to stay true to herself so she can stay true to the stories she tells.
Watch Jasmin representing Clinique.