One of the most photographed sites in Abilene celebrates its 10th year as a landmark on the ACU campus.
In the last decade, the nearly 40-foot-tall bronze sculpture has become a popular spot for baptisms, weddings, picnics and devotionals. It is a favorite backdrop for graduation and family photos. 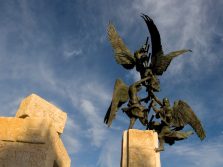 Jacob’s Dream was dedicated at the university’s Centennial Birthday Celebration in September 2006. The sculpture features four 8-foot-tall angels ascending and descending a ladder reaching to heaven, illustrating the biblical account of Jacob’s dream from Genesis 28. It is surrounded by an arrangement of limestone blocks inscribed with scriptures and incorporates a limestone pool.
Its sculptor, ACU art and design professor Jack Maxwell, allowed his art students to help with important details on the project.
As part of ACU’s 2016 Summit, Maxwell will speak about what inspired the sculpture. The session, titled “The Dream Behind the Dream,” will begin at 8:30 p.m. Tuesday, Sept. 20, at the sculpture site.
“Spaces can affect one’s emotions,” said Maxwell. “Spiritually, I’m drawn to nature. I thought it would be interesting to create a worship space that wasn’t in a building.”
With 24-hour access and open to anyone in the city, Jacob’s Dream has become the site of many important life events. Maxwell said one of his favorite stories is about a motorcycle group that had a baptism in the pool.
“The thing I’ve never really imagined is when you take down the walls, it’s not just an ACU thing,” Maxwell said. “I think people in the city have some ownership in it.”
The sculpture was the place Maxwell’s daughters received their marriage proposals and was the location of his son’s wedding. Today he takes his 2-year-old grandchildren to see their grandfather’s work.
“Those were the kind of things I would’ve never imagined,” he said.
To see more about the making of the sculpture, watch this Emmy-nominated 2007 documentary.
To learn more about ACU Summit events, visitacu.edu/summit.