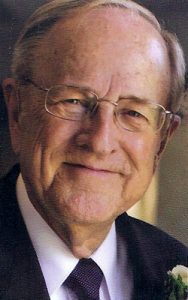 Joe Bon Baisden (’59), veteran evangelist and former longtime trustee of Abilene Christian University, died Aug. 17, 2016, in Belton, Texas, at age 79.
Visitation is from 5 to 7 p.m. Friday at the Belton Church of Christ (3003 N. Main St., Belton, Texas 76513). Funeral services will be at 2 p.m. Saturday at First Baptist Church (506 N. Main St., Belton, Texas 76513), with burial before the service at North Belton Cemetery. A reception will follow the service at First Baptist.
He was born Dec. 7, 1936, in Ennis, Texas, and was salutatorian of the 1955 graduating class of Killeen (Texas) High School. After graduating from ACU with a B.S.Ed. degree, he married Janelle Davis (’56) on June 20, 1959. He did graduate work in music at The University of Texas at Austin and in Bible at ACU.
Baisden served as a minister for many churches, including congregations in Austin (1958-61, 1963-65); Bloomington (1961-63); Washington, D.C. (1965-67); Abilene (1967-70); and the Belton Church of Christ (1971-2004). He conducted gospel meetings and singing workshops for years, and after retiring, served as interim minister for 12 congregations. He and Janelle also were active in promoting Christian camping.
Everywhere he lived, he was a giant in community service. Baisden was a longtime member of the Belton Lions Club (Lion of the Year for 1973-74); Belton Area Chamber of Commerce; Belton library board; and vice chair of the Bell County Child Welfare Board. He served as a Belton councilman and received the Harris Fellowship from the Temple Rotary Club. He also was secretary of Austin’s Northeast Kiwanis Club and president of Abilene’s Key City Kiwanis Club. He received a Friend of Education award from Texas State Teachers Association (1986) served on the Chaplain’s Professional Consultation Committee for Scott and White Memorial Hospital, wrote a weekly column for The Belton Journal, and served on the Parent Advisory Committee for Belton ISD.
He served on ACU’s Board of Development (1975-91), its first Visiting Committee for the College of Biblical Studies (1982-87), the university’s Board of Trustees (1991-2007) and its University Council (2008-16). He received ACU’s Distinguished Alumni Citation in 1980, and in 1991, he and Janelle were presented ACU’s Christian Service Award.
He was preceded in death by his parents, William Joseph Baisden and Bonnie Dean (Whatley) Baisden.
Among survivors are Janelle, his wife of 57 years; a son, Donnie Baisden (’85); two daughters, Jane Anne (Baisden ’86) Cox and Katherine (Baisden ’90) Gibson; and six grandchildren.
Memorials may be made to the Abilene Christian University’s Baisden Scholarship Fund (online or mailed to Gift Records, ACU Box 29132, Abilene, Texas 79699-9132), Belton Church of Christ’s Camp Koinonia or Scott & White Hospice.