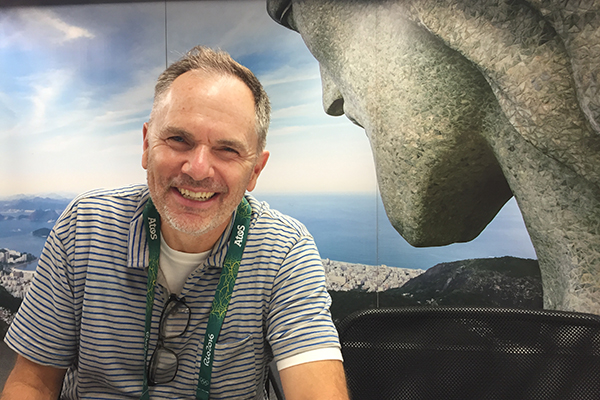 The Games of the XXXI Olympiad – also known as the 2016 Summer Olympics from Rio de Janeiro, Brazil – are the fourth such assignment for sportswriter David Ramsey (’81), an award-winning journalism graduate of Abilene Christian University. A columnist for The Gazette newspaper in Colorado Springs, Colo., he writes about professional and collegiate sports in and around Colorado Springs, the home of the U.S. Olympic Committee and the Olympic Training Center, and for ACU Today magazine. Follow Ramsey’s daily coverage here.

Ramsey received ACU’s 1994 Gutenberg Award from the Department of Journalism and Mass Communication for distinguished professional achievement. This image of him from Rio is courtesy of photographer Mark Reis of The Gazette, a veteran of eight Olympic assignments. See some of Reis’ Olympic coverage on this Instagram page. 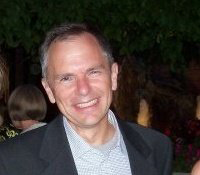 Compared to other Olympic assignments, what was involved in traveling from your home in Colorado Springs to Brazil?

Getting here was easy. I flew from Denver to Houston for a direct flight to Rio. I was joined on the flight by three dozen Olympians, including volleyball gold medalist Kerri Walsh-Jennings and fencer Ibtihaj Muhammad. Seven Homeland Security officers were at the gate in Houston.

What’s involved in getting around Rio and to the various competition venues?

We’re spoiled at the Olympics. I’m on buses for hours every day traveling from venue to venue, but the buses travel in Olympic lanes that are cleared of traffic. This means I’m often rolling fast past traffic jams. Olympic Lanes are great for journalists and not-so-great for Rio drivers.

What do you see from outside your hotel window?

Rio is a huge city with 11 million people in the metro area. I’m staying in newly built media lodging that will become condos. It’s on the southern edge of the city, and there’s not much out there. I’m surrounded by hills with jungle-like growth, and I go to sleep at night listening to exotic bird calls. I’m happy to have a bed in which to sleep. After a complicated mixup, there was no room for me when I arrived in Rio. After a frantic day, a man named Dark Santos (yes, Dark is his real name) solved my Olympic housing crisis.

What are the security issues you face each day, and how do you weigh the potential risk with doing your job as a journalist?

Security is serious at Olympics. The lines have not been long here in Rio. I spent hours in security lines in 2004 in Athens, but it’s never been as bad since. At the Beijing Games in 2008, security personnel were uncomfortably thorough with frequent pat downs. In Sochi in 2014, the security was lax and workers seemed only lightly interested. Rio is just about right.

What are the most favorite and forgettable foods you have consumed thus far, and why?

The seafood can be amazing, especially at Adega Perola, a Portuguese restaurant near Copacabana Beach. Wish I were sitting there right now instead of typing these words. I eat many of my meals at the media center, and it’s fine. Basic. Fast. Decent food. I’m just happy to have time to eat.

Rio looks like a travel postcard but we hear appearances can be deceiving. What are some of the contrasts you have observed?

Rio is a city of extremes.  It reminds me of Mexico City. When Rio soars, it soars with any city in the world. The mountaintop Christ the Redeemer statue is every bit as beautiful as you expect. The port area is filled with 19th-century buildings and city squares with massive palm trees. The beaches are gorgeous. But when Rio sinks, it’s right down there with the worst of the world. A stream that is essentially an open sewer flows right by Olympic Park. This amazes and depresses me. The slums – favelas – dominate many sections of the city. I have to wonder – anybody has to wonder – if the billions spent on the Olympics could have been better used to clean up the water and build housing and improve life for the poor in Rio.

Which competitions are you covering and what have been your favorite moments thus far, and why?

I’m covering basketball, track and field, swimming, gymnastics, cycling, wrestling and soccer, among others. This is my fourth summer Olympics, and I’ve watched 15 of Michael Phelps’ gold medals. A couple days ago, I rode an elevator with Phelps from a fifth floor to the ground floor. He was looking at his photo on the cover of Sports Illustrated and observing how the image had been photoshopped. He was not pleased. My favorite moment was a personal one. I covered 800-meter runner Boris Berian in high school. He was a multiple Colorado state champ who later lost his way, dropped out of college and traveled home to work the counter at McDonald’s. That was two years ago. He ran in the Olympic 800 finals and, alas, finished last, but he finally reached his potential.

How does Rio compare to other Olympic venues you’ve experienced?

Most Rio residents speak Portuguese. Has language been a barrier or a bridge for you, and why?

Brazilians are kind, patient and almost always willing to help, even if it costs them a few minutes. I learned long ago to be willing to ask questions when I can’t find my way in a city far from home. Last night, I was looking for a famous old and ornate cafe here, the Columbo. The cafe is hidden in a complicated section of downtown with winding and narrow cobblestone streets. I knew I was close, but couldn’t find it. I asked a man on the street for help. He didn’t speak English, but he understood “Columbo.” He led me and a friend for two blocks to the front door of the cafe. That story sums up Brazilians for me.

What advice would you give a journalist covering the Olympics for the first time?

You can’t fully prepare, and you need to be able to improvise, and you need to find a way to survive and thrive without much sleep. In my previous four Olympic trips, I made detailed plans for each day, and I made those plans weeks before the trip. On this trip, I plan a day ahead. I let what’s happening that day dictate my plans. Covering the Olympics reminds me of life as a student at ACU when I was going full speed 18 hours, and sometimes more, each day. Same at the Olympics. I’ll sleep when I return home to Colorado. One other slice of advice: Make sure to get out of the Olympic bubble and have fun. Grumari Beach is a 10-minute cab drive from my hotel. Sitting in the sand, watching the waves and thinking about nothing has become as essential as sleeping and eating.