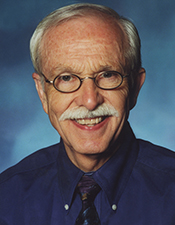 Longtime Abilene Christian University teacher education professor Dr. Chantrey Alfred Fritts Jr. (’53) died Aug. 9, 2016, at age 85. He was a 41-year resident of Abilene, spending the final few years of his life in Lubbock while caring for his wife through a medical crisis, and then his own struggle with Alzheimer’s.
Fritts was born April 9, 1931, in Sterling, Colo., and graduated from South Denver High School in 1949. He married Aynsley Lillian Ruth Pennock on June 11, 1955.
He earned a bachelor’s degree in education from ACU, and a master’s (1954) and a doctorate in education from the University of Denver (1967). He was a teacher, counselor and administrators in Denver Public Schools for 14 years. He joined the ACU faculty in Fall 1967, beginning more than four decades of service as professor and chair of teacher education, and supervisor of student teachers at his alma mater.
Among his accolades were being named ACU’s Outstanding Teacher of the Year in the College of Professional Studies (1986-87), and receiving the Mentor Award from the Texas Student Education Association (1985), and the Kyle Kilough Award as educator of the year by the Texas Society of College Teachers of Education, Texas Association of Colleges for Teacher Education and the Texas Teacher Center Network (1988). He also served in the U.S. Army Reserve.
Fritts retired in 2001 as professor emeritus of education, and was a longtime elder at Abilene’s Hillcrest Church of Christ.
He was preceded in death by his parents, Edna Violet Smith and Chantrey Alfred Fritts, Sr., and a sister, Nancy Vourexes.
Among survivors are Aynsley, his wife of 61 years; three daughters, Debbie (Fritts ’80) Paxton, Jennifer (Fritts ’82) Carpenter and Toga Broom; six grandchildren; and three great-grandchildren.