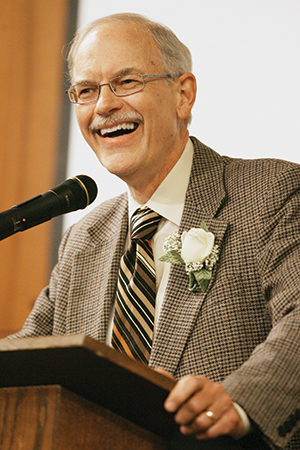 Abilene Christian University provost emeritus Dr. Dwayne D. VanRheenen, 72, died Aug. 11, 2016, in Washington state following an illness. Plans for a memorial service are in progress.
VanRheenen was provost from 1996-2010, leading the academic side of ACU with distinction and serving as champion over a number of new initiatives and innovations that have strengthened the university as a leader in Christian higher education. In an essay in the Summer 2009 edition of ACU Today magazine following his retirement, dean emeritus Dr. MaLesa Breeding (’80) wrote about the difference he made on the Hill for more than a decade:

As I write from a corner booth in the library’s Learning Commons, I’m surrounded by students and faculty engaged in conversations over coffee, laptops and iPhones. Thirteen years ago, in contrast, this spot would have housed the card catalogs, and the library was where you went if you wanted isolation. Life in the Learning Commons closely reflects how students learn in the 21st century. It is only one of the many ways in which Dr. Dwayne VanRheenen has changed academic life at ACU.

Thirteen years ago, Dwayne arrived on campus to assume the role of provost, a title that often leaves people scratching their heads. Simply stated, ACU’s provost serves as chief academic officer, overseeing all academic programs and working closely with the deans of each college as well as the deans and directors of programs such as the First-Year Program, the Honors College, Study Abroad and the Graduate School. The provost also oversees the Adams Center for Teaching and Learning, the library, the Registrar’s Office, the Office of Institutional Research, and Curriculum and Advising. The job is enormously demanding, but he filled the role with remarkable competence and grace.

Like the work of most dynamic leaders, Dwayne’s work has not been without controversy. In his first year here, he denied tenure or promotion to several faculty members. Supported by some, opposed by others, this action sent a message to faculty that a new day had arrived at ACU.

No longer would faculty be tenured simply because they were committed to the university or had served for a long time, though he saw value in those things. Tenure would require a substantial contribution to one’s discipline and to the integration of faith into each faculty member’s field of study. Today, faculty regularly present and publish at the highest levels, bringing national and international attention to ACU as well as improving their work in the classroom. Dwayne worked tirelessly to ensure faculty had the financial resources and time to accomplish these goals. He understood better than most that the quality of scholarship among faculty members significantly impacted the university’s ability to prepare students to think critically, globally and missionally.

Few people could have stronger intellectual and spiritual convictions than Dwayne. Shortly after his arrival, he began asking the faculty about how we integrated our faith and our teaching. In 1996, this was a new conversation but an exciting one. Faculty began to realize, in this regard, that being a professor in Christian higher education required more than simply being an active member of a local congregation.

Church participation was important to him, of course, but Dwayne pressed the questions that led us to reflect on how we can help students find God in poetry, in history, in the boardroom as well as in the classroom. Further, Dwayne believed openness to other opinions and ideas is an academic imperative, essential to one’s spiritual maturity. He knew scholars in Christian higher education must engage in conversations allowing them to create covenant with others – even those with whom they disagree. He welcomed voices from other cultures, races, ethnic traditions and even other religions. He knew that only through conversations such as these could we prepare our students to engage in a complex world requiring dialogue, not just monologue. His desire was for ACU to produce students who can think in terms of paradox and ambiguity in their search for truth.

During his time at Abilene Christian, Dwayne was a mystery to some people. He demonstrated personal power, yet his demeanor was largely understated. Those who didn’t work closely with him may not have known how hard he could laugh nor how he pastored so many of those with whom he worked. However, Dwayne was widely known as a person of towering work ethic and of high expectations – for himself and for the university. Certainly, the deans and others who worked closely with Dwayne knew he worked more hours in a day than most could imagine, and even after his departure, his expectations of excellence cast a long shadow over us.

Dr. Royce Money, ACU’s 10th president, once referred to Dwayne as a renaissance man and, indeed, he is.

Though his Ph.D. is in communication, he can discuss theological ideas as easily as he can talk about rhetorical analysis. He can engage in deep conversations about phenomenology or feminism, but he also enjoys discussing the latest sporting event. Dwayne lives broadly, modeling what genuine scholarship, teaching and discipleship are all about.

Not long ago in a conversation among deans, Dwayne was referred to as one of the most transformative figures ACU has known. During his time here we have seen the creation or the significant advancement of such initiatives as the Adams Center for Teaching and Learning, the Honors College, the Study Abroad program, the First-Year Program, the College of Education and Human Services, the School of Social Work, the School of Information Technology and Computing, the Graduate School of Theology, faculty renewal leaves, at least six external accreditations, the advancement of women and minority faculty, dollars for faculty development, rigor in tenure and promotion, and a new general education core.

For Dwayne, these things were all in a day’s work. For us, they represented the transformation of a university.

Dwayne’s departure from ACU and his move into retirement was not easy. I remember well the day he announced his plans privately to the deans. The news was met with tearful embraces and prayers – both for him and for us.

He hired each of us. He mentored us all. He prayed with us and, at times, cried with us. He dug us out of holes, both those we fell into and those we dug ourselves. He let us have a lot of fun at his expense. He made us think, and he allowed us to see him think, always without judging or placing blame. He loved us, and he led us – and it is no small thing to say that one has been loved and led by Dwayne VanRheenen. His fingerprints are everywhere.

Because of that, we are forever changed.

Among survivors are his wife, Joan; two sons, Nathan VanRheenen and Derek VanRheenen (’00); a daughter, Michelle (VanRheenen) Westerholm; and a brother, Gailyn Van Rheenen (’69). Watch this blog for a full obituary to come.