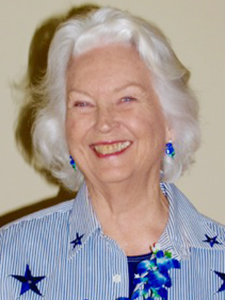 Gladys (Shoemaker ’52) Faulkner of Driftwood, Texas, died July 16, 2016, at her ranch home near Austin at age 86.
She was born April 28, 1930, in Fort Worth, where she graduated from Paschal High School in 1948. While a student at Abilene Christian, she began dating fellow Paschal graduate Paul Faulkner and the two married July 12, 1952, after earning their degrees. For the next 64 years Gladys devoted her energy and creativity to her family as the Faulkners ministered to churches in Kansas, North Carolina and ultimately Abilene where they lived for 39 years.
After Paul completed doctoral studies at Southwestern Theological Seminary and joined the Bible faculty at ACU, Gladys returned to graduate school and earned her master’s degree in education in 1976. She taught in Abilene’s Headstart program for many years.
Beginning in 1974, Gladys regularly traveled with Paul around the U.S. and to eight countries where he and his former ACU roommate, Dr. Carl Brecheen (’52), conducted Marriage Enrichment Seminars.
After Paul retired in 1996, the couple moved to Driftwood where they built the Cypress Springs Ranch on the banks of Onion Creek. There they continued to minister to families and couples in crisis and served together on the Ministers Support Network team blessing ministry couples.
She was preceded in death by her parents, Walton and Vivian Shoemaker. Among survivors are Paul, her husband of 64 years; four children, Debbie (Faulkner ’76) Clinton, Von Faulkner (’78), Brad Faulkner (’83) and Connie (Faulkner ’86) Brown; eight grandchildren; and two great-grandchildren.
Memorials may be made online to the Paul and Gladys Faulkner Endowed Scholarship or Ministers Support Network (or mailed to Gift Records, ACU Box 29132, Abilene, Texas 79699-9132), or the Community Enrichment Center (6250 N.E. Loop 820, North Richland Hills, Texas 76180).