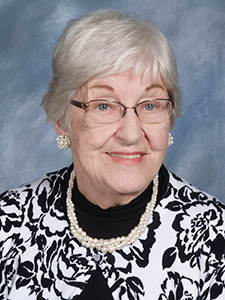 Dr. Donice (Hawes) Kelly Pruitt, former longtime chair of the Abilene Christian University home economics department, died July 7, 2016, in Lubbock at age 94.
Pruitt was born April 21, 1922, in Benton, Kan., and graduated from high school in Whitewater, Kan., in 1940.
She attended Harding University before earning a bachelor’s degree in home economics education in 1943 and a master’s degree in 1951, both from Kansas State University; and a doctorate in home economics, sociology and higher education from The Ohio State University in 1965. She also did graduate studies at Penn State University, and became a Certified Home Economist in 1987.
Pruitt taught home economics in three Kansas public school systems before joining the ACU faculty in 1948. She left ACU to become associate professor of home economics at KSU from 1955-68, and professor and chair of the Department of Clothing, Textiles and Merchandising at Oklahoma State University from 1968-74. She returned to ACU in 1974, serving as chair of the Department of Home Economics and Family Studies before retiring in 1987.
She was a member of the National Council of Home Economics Administrators, American Home Economics Association, Texas Home Economics Association, and central region chair for the Association of College Professors of Clothing and Textiles. She also was a longtime member of Hillcrest Church of Christ in Abilene.
She wed Alvin Kelly on Aug. 24, 1969, in Stillwater, Okla. and they were married 28 years until his death in 1997. She married Walter Pruitt in 2000 and he died in 2005. She also was preceded in death by her parents, Will and Thurza Hawes, and her sister, Averil Henry.
Among survivors are her four stepchildren, Kathy (Kelly) Feuerhelm, Mike Kelly (’80), Celeste (Pruitt ’77) Thompson and Allen Pruitt (’82); 15 grandchildren; and 10 great-grandchildren.