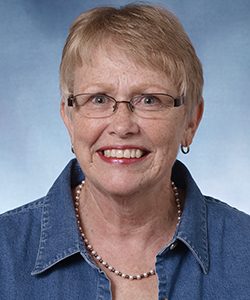 Bonnie Mignon (Pitt) Bailey, 68, a former longtime administrative assistant at Abilene Christian University, died May 30, 2016, in Abilene.
A visitation with the family is scheduled for 5-7 p.m. on June 3 at Piersall Funeral Directors (733 Butternut St., Abilene, Texas 79602). A memorial service will be held 10 a.m. on June 4 in the Hillcrest Church of Christ (650 E. Ambler Ave., Abilene, Texas 79601), followed by a graveside service at Elmwood Memorial Park.
Bailey was born Jan. 29, 1948, in Memphis, Tenn., where she graduated from Harding Academy in 1966. She attended Harding University from 1966-68 and Freed-Hardeman University in 1976. She met Dr. Fred Bailey while the two attended Harding, and married Aug. 22, 1968.
She and Fred began work at ACU in 1984, with Bonnie retiring in 2013 after a nearly 30-year career in the Provost’s Office, Information Services and the Department of Biology. The Baileys lived for a year in China in the mid 1990s while Fred, a professor of history, served a teaching fellowship at Nanjing University.
Bonnie was preceded in death by her parents, Andrew Martin Pitt and Janice May Pitt.
Among survivors are Fred, her husband of 47 years; a daughter, Amber (Bailey ’97) Perez; sons Alex Bailey (’03) and Stan Bailey (’02); a brother, Paul Pitt; six grandchildren; and two great-grandchildren.