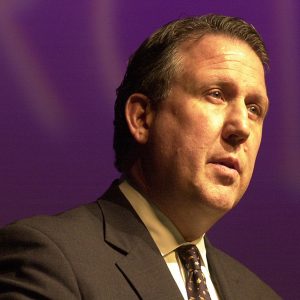 Former Abilene Christian University trustee and board chair Clarence Edward “Doc” Cornutt (’71) died in Dallas on May 28, 2016, at age 67 following a long illness.
Visitation with the family is May 31 from 5-6:30 p.m. at Sparkman Hillcrest Funeral Home (7405 West Northwest Highway, Dallas, TX 75225). A memorial service will be held June 1 at 1 p.m. at Skillman Church of Christ (3014 Skillman St., Dallas, TX 75206), with a reception to follow.
Cornutt was born April 18, 1949, in Pampa, Texas. He graduated in 1967 from Pampa High School, where he was active in many organizations while excelling in football and track and field. He turned down a football scholarship to Oklahoma University to enroll at ACU, where he majored in accounting and marketing. He married Linda Core (’70) on March 13, 1971.
He became a CPA while working as a senior accountant at Arthur Anderson and Company, before serving as executive vice president of Woodbine Development Corporation and overseeing development of Hyatt Regency Dallas, Reunion Tower, Hyatt Regency Fort Worth and the renovation of historic Union Station. He was chair of Hunt Oil Company (1983-93) and Hunt Refining Company (1984-97), and president of Hunt Realty Corporation and Hunt Financial Corporation (1993-97). From 1997 until an illness forced his retirement, he served as chair and CEO of Argent Property Company, an organization he formed in partnership with an affiliate of Hunt Realty Corporation in Dallas to develop and invest in strategically located business/industrial parks, industrial properties, and industrial portfolio companies.
Cornutt was a trustee of Abilene Christian from 1989-2010, including three years as board chair (2007-10). He co-chaired the university’s $100 million “To Lead and To Serve” and its $150 million Centennial campaigns, received a Distinguished Alumni Citation in 2005, and chaired the College of Business Administration Advisory Board. Cornutt also was a trustee and board chair at Dallas Christian Schools.
His civic involvement included United Way, Leadership Dallas, the Strategic Issues Committee of the Dallas Chamber of Commerce, the Dallas Economic Development Advisory Board, Goodwill Industries of Dallas (board chair), Dallas Summer Musicals (executive board) and the National Association of Office Parks (trustee). Cornutt also was a deacon, elder and teacher at Skillman Church of Christ, and active in youth scouting organizations.
He was preceded in death by his parents, Jim and Dona Cornutt. Among survivors are Linda, his wife of 45 years; daughters Sara (Cornutt ’99) Boucher and Shelly (Cornutt) Goguen; a son, Chris Cornutt (’01); five grandchildren; a sister, Molly (Cornutt ’71) Goodwin; and a brother, Dr. James Cornutt (’72).