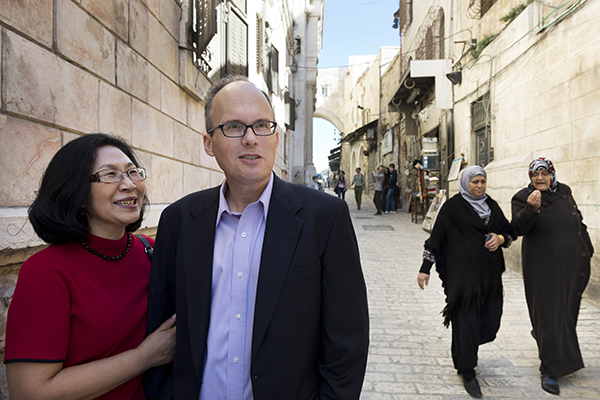 When Old Testament scholar Dr. Mark Hamilton (’90 M.Div.) told me about his upcoming semester in Israel with his wife, Dr. Samjung Kang-Hamilton (’88 M.R.E.), revisiting the place where they first met nearly 30 years earlier, my story-telling wheels began to turn.


It will likely embarrass the two Abilene Christian University professors but Hepburn and Olivier in “Love Among the Ruins” came to mind. In the final scene of Katharine and Sir Laurence’s 1975 movie that swept Primetime Emmy Awards, he implores her, “Grow old along with me, the best is yet to come,” a line borrowed from a famous Robert Browning poem.
I envisioned seeing Mark and Samjung walking, arm in arm, down the streets of Old Jerusalem once again. After all, the Hamiltons’ first date in Israel – where they were among 15 students on an ACU semester abroad program in 1987 – was to the Church of the Holy Sepulchre.
Yes, that’s the place where many believe Jesus was buried, but what would you expect from a couple of biblical-scholars-in-the making? As writer Paul A. Anthony (’04) explains in “Holy Lands” in our new issue, the down-to-earth lovebirds explored the sacred site and then went out for some pizza.
They married two years later and the rest is, well, history.
One of Mark’s biggest fans in the story is archaeologist Dr. Rob Homsher (’03), a former student of his who teaches at Harvard University and is assistant director of the Jezreel Valley Historical Project and a staff member of the Megiddo Expedition, one of the most important sites in biblical history.
Documenting the Hamiltons’ second semester together in that part of the world was a challenge, given its distance (7,100 miles) from Abilene. But thanks to some networking, I was introduced to Jonathan Bloom, a talented photojournalist who lives near Tel Aviv and has done some striking portraiture work for The Jerusalem Post and Yedioth Ahronoth, the city’s largest newspaper, among prominent magazines and other publications.
Bloom spent parts of several days with Hamilton at the Albright Institute for Archaeological Research where Mark lived and studied as the Seymour Gitin Professor, and at several historical sites in the region. His images are stunning, and we feature them prominently in our print edition and also in the companion pages of online-only Bonus Coverage, which is anchored by Mark’s essay about his Fall 2014 experience.
Enjoy the 20 pages of words and images by clicking on the viewer below:
PREVIOUS POST   NEXT POST
SHARE: