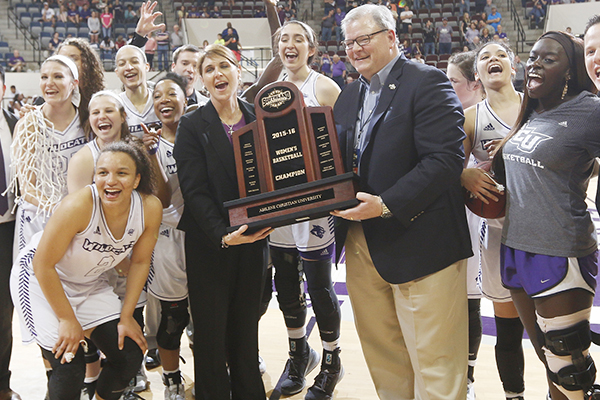 Picked in a preseason poll to finish ninth in the Southland Conference, the Abilene Christian University women’s basketball team continued its Cinderella season Saturday, and they had a ball doing it.
The Wildcats began their final regular-season game at home with a 9-0 run, a 38-24 halftime lead and capped it with a celebration and an improbable conference championship. A 63-52 win over Texas A&M University-Corpus Christi sealed the deal.
Head coach Julie Goodenough’s team is 26-3 overall, 17-1 in the Southland, 14-0 at home and now awaits its next assignment: a first-ever berth in the Women’s National Invitational Tournament and a shot at even more heroics.
ACU’s only losses this season are to Kansas State, Texas Tech and Lamar universities.
The WNIT announces its field March 14 and first-round games begin March 16. The title game is played April 2. Semifinalists last year were UCLA, Michigan, Temple and West Virginia, with UCLA beating WVU 62-60 for the championship.
ACU won’t be eligible for the Southland’s postseason tournament until the 2017-18 season but became the conference’s automatic qualifier for the WNIT with its spotless record in regular season play.
Saturday, junior guard Alexis Mason scored 20 points and junior center Sydney Shelstead added 19 to lead the Wildcats over the Islanders.
Their 26 wins ties the second most in ACU women’s basketball history, matching the 1997-98 team that finished 26-5 and advanced to the finals of the NCAA Division II Southwest Region Tournament. Abilene Christian’s all-time record for wins was set by the 1995-96 team’s 31-2 record and third-place finish in the national tournament.