Home/ ACU News/ Campus News/ Pep and perks: Wildcat Club returns to ACU
Main Content
Features Academic News Alumni News Campus News ACU Online All Categories
Academic News ACU News ACU Online ACU Remembers Alumni News Campus News Faculty Spotlights Features Graduate Programs Research Sports Student Experience Student Spotlights Student Success Undergraduate Programs Why ACU?
In deciding what to call its new donation-generation organization, the Abilene Christian University Athletics program has opted for an oldie-but-goodie: the Wildcat Club.
Announced by director of athletics Lee De Leon on Jan. 27 and spearheaded by senior associate director of athletics Dave Kinard, the Wildcat Club will make it easy for alumni, fans and friends of ACU Athletics to give to the program. The more you give, the greater the rewards, such as first dibs on seats in the new football stadium, tickets and transportation to selected road games and other perks.
If the name sounds familiar, that’s because it is. This latest incarnation hearkens back to Wildcat Clubs of old. Like Great Depression old. The Oct. 10, 1929, edition of The Optimist includes a story about a campus bonfire being lit (intentionally) by the “Loyal Wildcat Club,” a group created to “further the pep” among students. All were welcome and, in fact, expected to join.
In the late 1940s, another Wildcat Club formed, according to an April 1949 Optimist article, with a stated purpose of trying “to help the school in athletics as much as they possibly can.” Comprised of former letter winners and friends of the college, that version of the club staged events and funded a variety of projects that enhanced the department, including the conversion of a campus dormitory into student-athlete housing and the purchase of a new 14-passenger Mercury automobile to replace the broken down athletics bus affectionately known as the Grey Goose. 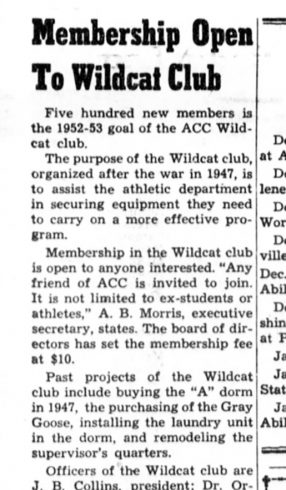 In 1950, the Wildcat Club commemorated the 25th year of A.B. Morris’ coaching tenure by hosting a banquet at the Hotel Windsor in downtown Abilene. The guest speaker for the evening was Morris’ former coach at Texas A&M University, Dana X. Bible.
In 1958, the club took on its boldest initiative to date: a $20,000 upgrade to the track stadium, which included the addition of two dressing rooms and a press box. Those were halcyon days for the Wildcat “cindermen,” so called because the track surface in those days was made of packed cinder. Two years prior, team member Bobby Morrow (’52) had won three Olympic gold medals in Melbourne, Australia, becoming one of the world’s most famous figures and inviting attention to Abilene Christian like the college had never experienced before. Among those who noticed was California quartermiler Earl Young who graduated in 1958 and two years later would earn an Olympic gold medal of his own.
Through the 1960s, the Wildcat Club sponsored ACU Athletics’ annual banquet, at which senior letter winners were presented a graduation gift. In the early 1970s, head football coach Wally Bullington (’51) launched a luncheon series at the Thunderbird Lodge to let Wildcat Club members and guests hear from assistant coaches and players each week during the season.
In the mid-1980s, the Lettermen’s Association was created in an attempt to keep former student-athletes better connected to and involved with the university. The Wildcat Club kept meeting each week during the football season well into the 1990s, but the Lettermen’s Association eventually became the program’s dues-paying organization and functioned as the club once did. 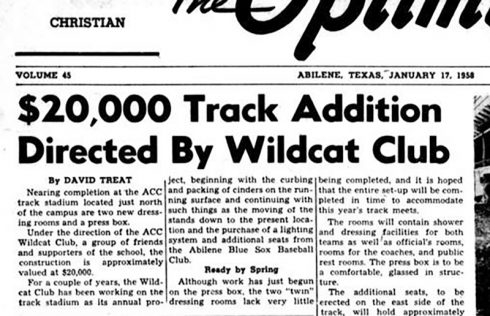 Until now. In December, ACU Athletics notified all former letter winners that the Lettermen’s Association will grant instant, automatic and free membership to anyone who played for the Purple and White. The purpose, like when the group was originally founded in 1986, will be to keep all Wildcats updated on the latest exploits of the current crop.
The Wildcat Club, thus, becomes the new fundraising vehicle for ACU Athletics. De Leon thinks the name has a ring to it. Hopefully several.
“Money raised from the Wildcat Club will absolutely determine wins and losses,” De Leon said. “The more our supporters give, the more resources our teams will have to compete for championships.”
Right now, the playing field on which Wildcat teams are competing isn’t level. For example, once ACU moved up from Division II to Division I in 2013, the number of scholarships it can award increased significantly. But can and will are two different matters.
Take football. In Division II, head coach Ken Collums had 36 scholarships to divvy up among his players. Division I FCS (Football Championship Subdivision) schools are allowed 63. Good news, right? Right, but only if ACU can generate the money necessary to cover those extra 27 scholarships. Multiply 27 by the cost of tuition, room and board, and you begin to see the financial need. And that’s just football. The university has carefully invested in this Division I transition, but it can’t cover all of the costs and stay within budget.
And it shouldn’t have to. Every other university in the Southland Conference and nearly every other in Division I has a fundraising organization to raise money for scholarships, facilities and other projects. Now ACU has one of its own, and none too soon. Collums and other ACU coaches are entering most games with fewer scholarship players than their opponents, yet still finding ways to win at a remarkably successful clip. The women’s cross country team won a Southland Conference championship last fall. The women’s basketball team leads the league with four games to go. Imagine the results if each of the Wildcat teams were fully funded.
The goal for the Wildcat Club is to reach 500 members by June 1. That would be a great start, but think bigger. What if, through the Wildcat Club, former ACU football players banded together to get Collums up to 63 scholarships? What if former Wildcat basketball players created a fund to allow Julie Goodenough and Joe Golding (’99) to fly their teams to a couple of conference games a year so their players wouldn’t have to roll back in by bus from some distant Southland outpost just in time for an 8 a.m. class the next morning? Competing on the Division I level has already given ACU national exposure like it hasn’t seen since the days when Morrow and Young were winning Olympic gold. But with that exposure comes the need for fans of the university to step up in support.
Don’t misunderstand: ACU has always had generous donors, as evidenced by the recent lead gifts to construct Wildcat Stadium and install AstroTurf on the baseball and softball fields. But someone has to follow that lead. The Wildcat Club gives everyone who cares about ACU Athletics the opportunity to do that.
Everything old is new again.
Further the pep and join the club today!
PREVIOUS POST   NEXT POST
SHARE: