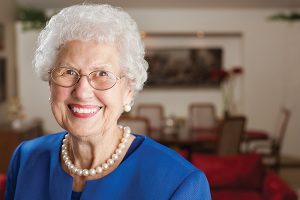 Susie Earline (Davidson ’48) Perry passed away Feb. 19, 2016, in Abilene, Texas, at age 88.
A memorial service will be held at University Church of Christ on Sunday, Feb. 21, at 2 p.m. Piersall Funeral Directors (733 Butternut St., 79602) are assisting the family in the memorial and graveside services. Visitation with the family will be at a reception in the University Church of Christ MAC after the memorial service. A private graveside service will be held Monday at the Texas State Veterans Cemetery in Abilene.
Earline was born Nov. 3, 1927, in Wichita Falls, Texas, where she attended grade school before graduating from Rusk (Texas) High School. She married Dr. Lowell G. Perry (’47) on June 10, 1947, in Abilene. She studied at Texas University and Abilene Christian University before finishing a bachelor’s degree in English and business in 1948 from Indiana State University, where Lowell was working on a master’s degree in speech. Later, she taught at Draughon’s Business College in Abilene and was an instructor of business administration at ACU. She worked on a master’s degree in missions at Abilene Christian and taught from 1970-74 in its summer missions workshop. She was a successful real estate agent in Abilene for 22 years, retiring in 2000.
During ACU’s May 2013 Commencement, Earline received ACU’s Dale and Rita Brown Outlive Your Life Award. She served many years on the Board of Directors for World Christian Broadcasting Corporation, helping advance her husband’s dream and her own desire of spreading the gospel throughout the world via shortwave radio. Lowell died in a plane crash in 1977 near the island of Martinique while scouting a broadcast site in the Caribbean. He taught in ACU’s Department of Communication for more than two decades, founding the campus radio station and the broadcast program now overseen by the Department of Journalism and Mass Communication.
Earline was a longtime member of University Church of Christ in Abilene, where she mentored other women, was a member of prayer group that had met weekly for more than 45 years, and was known for her personal ministry of encouragement. Her love of missions, fostered by exploring Europe in 1950 and by living in Brazil with her husband from 1965-67, was a lifelong passion.
She was preceded in death by her parents, M.E. and Susie (Wright) Davidson; Lowell, her husband of 29 years; and a sister, EuAlice (Davidson ’57) McMillan and brother-in-law Dr. Earle McMillan (’55).
Earline is survived by two sons, David Perry (’73) and his wife, Vonnie (Southern ’74), of Abilene, and Greg Perry (’83) and his wife, Jana, of Nashville, Tennessee; a daughter, Susan Perry (’77) of Abilene; grandchildren Heather (Perry ’00) Gentileschi, Rosalyn (Perry ’06) Haug, Camille (Perry ’06) Acosta, Seth Perry, and great-grandchildren Kate and Gracie Gentileschi, Isabella, Madelyn, and Amelia Quinn Haug and Sofia and Sebastian Acosta.
Memorials may be made to World Christian Broadcasting (605 Bradley Court, Franklin, TN 37067).