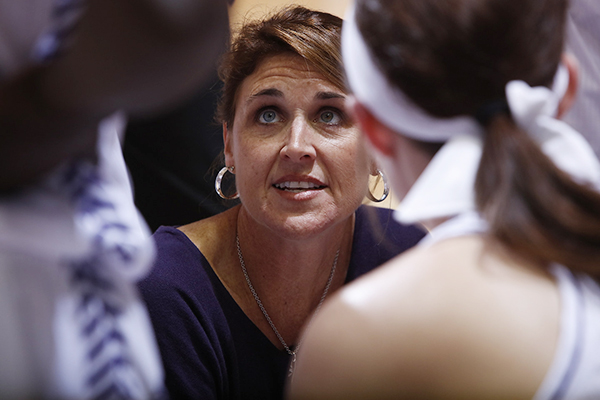 There’s no crying in baseball, we were famously told by Jimmy Dugan, Tom Hanks’ crusty character in A League of Their Own. Basketball is a different sport, and this is a different story.


Now Julie Goodenough doesn’t cry easily. In fact, in the four years and 103 games in which she has been the head coach of the Abilene Christian University’s women’s basketball team, I’ve only seen her misty-eyed three times.
The first was in her third game on the job. It was in Canyon on Nov. 28, 2012. West Texas A&M University, ACU’s heated (and, to some, hated) rival in the Lone Star Conference, paused before the introduction of the starting lineups for a moment of silence to honor the memory of 10-year-old Rex Fleming, who had died three days before following a two-year battle with brain cancer. As she stood alongside her team, Goodenough wept quietly for the son of her colleague, ACU associate director of athletics for media relations Lance Fleming (’92).
The second was last December in Lubbock after Goodenough’s team lost a hard-fought, knockdown drag-out decision to Texas Tech University, 71-65. The emotion that night flowed from the deepest recesses of a West Texas girl’s heart. Goodenough grew up in Haskell, rooting for the Lady Raiders whose legendary head coach, Marsha Sharp, became one of her mentors. In fact, Goodenough – at the time, still Julie Roewe – was so inspired by watching Sharp’s team win the 1993 national championship that she summoned the gumption to call up that guy she had been eyeing, Rob Goodenough. They married a year later.
When that ACU loss in Lubbock ended and she had finished her postgame radio interview with me, Goodenough buried her head in Rob’s shoulder and sobbed. Not so much because her team had lost a basketball game. The tears seemed more involuntarily, a physiological reaction borne out of the energy she had put into beating a program she says she cheers for 364 days a year.
That was Dec. 2, and it was ACU’s last loss. 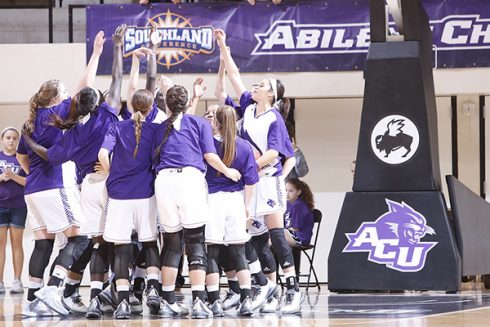 Since then, Goodenough’s Wildcats have reeled off 11 consecutive wins; 10 against NCAA Division I teams with a combined record of 94-62. The streak quite literally came out of thin air.
Forty-eight hours after the Tech game, the Wildcats gutted out a 75-71 victory over Grand Canyon University in a tournament hosted by Air Force Academy in the higher altitude of Colorado Springs, Colo. The next day, ACU dealt red-hot Eastern Michigan University – a team that would a month later knock off the University of Michigan – what is still its worst loss of the season, 73-59.
Following a week off so her players could take their fall semester final exams, Goodenough’s team aced what amounted to its mid-terms: road wins over Eastern Washington University and the University of Idaho, each by a deceptively large margin of 12 points and each of which was the opponent’s first home loss.
After a palate-cleansing home rout of Division III Schreiner University on New Year’s Eve, ACU opened Southland Conference play in Conway, Ark., against the University of Central Arkansas, the only team in the league with more wins at the time and which – like EWU and Idaho – hadn’t lost at home all season. The Wildcats broke open a close game in the second half behind senior Whitney Swinford and junior Sydney Shelstead, who scored 26 of their combined 34 points in the final 20 minutes, to win 61-49. That made it six straight wins overall and three 12-point decisions in a row against teams which hadn’t lost at home entering that game.
Back home on Thursday, Jan. 7, ACU avenged close losses to Northwestern State University on the road the previous two years with a resounding 21-point victory in Moody Coliseum over the two-time defending Southland tournament champions.
Three days and a 10-hour bus ride later, the Wildcats rallied from five points down in the final 67 seconds to nip Nicholls State University, 71-68, in Thibodaux, La., behind more 11th-hour heroics from Swinford, whose three-pointer tied the game and two free throws with 11 seconds to go extended a one-point lead to three.
Home again Jan. 13, the Wildcats got 20 second half points from junior Alexis Mason to stifle a 10-win team from McNeese State University, 79-62. The streak was nine.
Then last Saturday in Nacogdoches, Goodenough choked up after her team, yet again, came through in the clutch. Down eight to Stephen F. Austin State University after the first quarter, the Wildcats roared back to take a one-point halftime lead and two-point advantage after three quarters. In the final 10 minutes, Mason took over, scoring 15 points in a fourth period that saw ACU outscore SFA by 13 and win, 85-70. (That performance by Mason capped a four-game stretch in which she scored 89 points and earned consecutive Southland player of the week honors.)
What moved Goodenough wasn’t so much the team’s 10th straight win as the fact that it marked the first time in 10 tries that she had vanquished Stephen F. – as a player at The University of Texas-Arlington or as a coach – and, more poignantly, that it happened almost a year to the day after the untimely death of Jerry Isler, her coach at UTA and the man who convinced her to join the profession.
“I think,” Goodenough said as her eyes watered, “he’d be pretty happy that we finally beat SFA.”
With Swinford, Shelstead, Mason and the Dimba twins, Suzzy and Lizzy, Goodenough has the best starting five in the conference and is beginning to make noise nationally.
Now 15-2, ACU has been as high as 12th of 349 teams in Division I women’s basketball in RPI (ratings percentage index), a metric valuing a team’s win-loss record and strength of schedule. That’s an astonishingly high ranking for a team in a smaller league like the Southland and in just its third year as a Division I program. And the hits keep coming. For the last two weeks, the Wildcats have been No. 21 in a weekly poll of teams from so-called mid-major conferences.
While ACU remains ineligible for the Southland and NCAA tournaments until the 2017-18 school year, the team can earn a bid to the Women’s Basketball Invitational, a postseason event for teams which don’t qualify for the NCAA Tournament. That would be a tremendous consolation prize, but it’s not these Wildcats’ meow. No, the primary goal from day one has been to finish first in the Southland and be declared the regular season champs.
ACU isn’t in a league of its own but, at the moment, does lead the league at 6-0. There’s a long way to go – 12 more conference games, to be precise. But if the season does end with ACU on top, don’t be surprised if Goodenough sheds another tear or two. She won’t be alone. 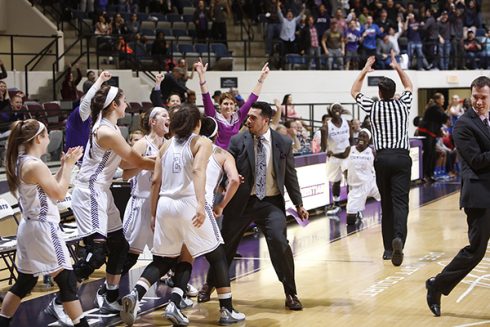