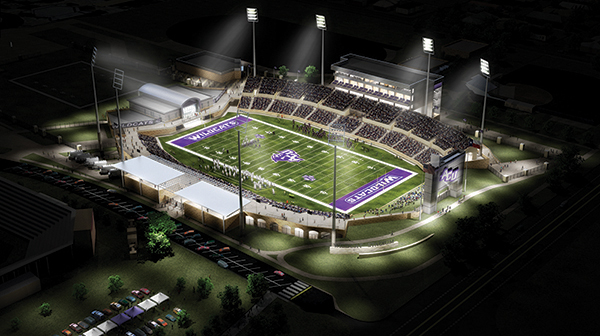 The Abilene Christian University Board of Trustees has voted to start construction on a new on-campus football stadium as fundraising continues for the project.
ACU will officially break ground for Wildcat Stadium at a ceremony after 11 a.m. Chapel on Friday, Feb. 19, during Sing Song weekend on campus.
President Dr. Phil Schubert (’91) announced Tuesday that the university has received more than $37 million in commitments toward construction of both the football stadium and the new Elmer Gray Stadium, $7 million more than the original goal set for the two facilities.
This allows ACU to prepare to break ground for the football stadium – Elmer Gray Stadium for track and field / soccer was completed in April 2015 – while continuing to raise funds, Schubert said in an email to ACU faculty and staff. The overall budget for both stadiums has grown to $50 million, he said, noting that the increased budget reflects enhancements necessary to ensure the quality of the facilities is consistent with the rest of the campus.
Schubert said he is confident in the university’s ability to secure the additional $13 million in commitments during construction.
“Already, we’ve raised more than our initial goal, and more than one-third of gifts to the football stadium have come within the past five months,” he said. “We believe it is important to leverage this amazing momentum, as well as wise to avoid additional financing and construction costs, by beginning this project now.”
ACU director of athletics Lee De Leon said he also is positive about the university reaching its fundraising goal.
“We appreciate our generous donors, and the way in which they have stepped up over the last few weeks is phenomenal,” he said. “While we still have more money to raise, we are thankful for how God is blessing this university.”
Funds raised for the Vision in Action initiative so far total $82 million, surpassing the original $75 million goal and making it the third largest campaign, dollar-wise, in ACU’s history. Other VIA projects include the Halbert-Walling Research Center, Onstead Science Center, and Engineering and Physics Laboratories at Bennett Gymnasium. Construction is complete or underway on all three science buildings.
“I’m so grateful to April (Bullock ’89) and Mark (’86) Anthony, whose vision and landmark gift for the stadium made it a reality,” Schubert said. “I continue to be amazed and grateful at the generosity that we’ve seen from our alumni, faculty, staff and friends, and I’m certain it will only grow as we officially break ground and prepare for our first home football game on Sept. 16, 2017. Wildcat Stadium will be a place beloved for generations, not only by the ACU community but by Abilene and West Texas as well.”