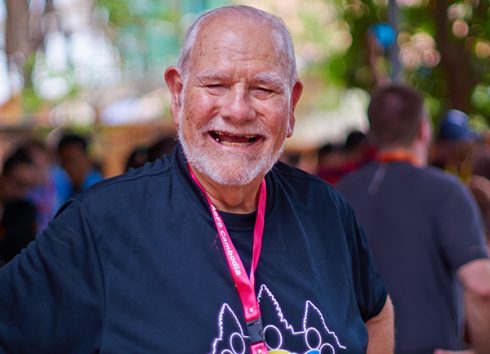 Family, students, colleagues and other friends stopped today to remember one of Abilene Christian University’s most beloved international ambassadors.
Kenneth Leroy Sinclair (’65) died unexpectedly Dec. 2, 2015, while traveling in Singapore at age 73. The former missionary-in-residence in ACU’s Halbert Institute for Missions was there to visit alumni and friends, encourage churches and officiate at a wedding, but fell ill and died a few days later of complications caused by the Dengue virus.
He was born Sept. 6, 1942, in Plainview, Texas.
Sinclair earned a B.A. in Bible and a Master of Missiology (1978) degree, both from ACU. He served as a missionary and church planter to various Church of Christ congregations in Malaysia, Singapore and the Republic of Indonesia; recruited and trained missions teams; and traveled extensively researching evangelism opportunities in countries such as Taiwan, Japan, China, Thailand, Vietnam, Cambodia, Myanmar, Malaysia, Singapore and Indonesia. In the U.S. he was pulpit minister for congegations in Lake Jackson and Sonora, Texas.
From 1991-2004, he taught Bible classes at ACU to several thousand international students who came to know their “Uncle Ken” as a lifelong friend, mentor and spiritual father.
In Abilene he was a member of South 11th and Willis Church of Christ, where his service as outreach coordinator included pastoral teaching and counseling in the Taylor County Jail and several prisons in the Texas Department of Criminal Justice system.
He was preceded in death by his parents, William H. and Myrtle (Sandefur) Sinclair; two sisters and a brother.
Among survivors are his wife, Estelle (White ’65) Sinclair; a son, David Sinclair (’96); a daughter, Kyna Sinclair (’99); and five grandchildren.