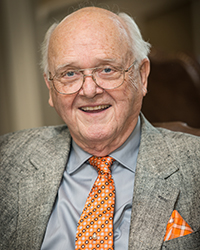 Dr. Edwin H. Enzor Jr. (’59 M.A.) died Nov. 30, 2015, in Abilene at age 80.
He was born Oct. 10, 1935, in Washington, D.C., graduating from Washington Lee High School in Arlington, Va., in 1955. He earned a B.A. in history from Lipscomb University in 1957, a master’s in communication from ACU and a doctorate in communication from Louisiana State University in 1964. He married Norma Anders (’61) on Aug. 30, 1956, and she died Nov. 13, 2014. He married Susan Purrington (’72) in 2015.
Enzor retired as professor emeritus of communication in 1998 after a 33-year career at ACU in which he served as assistant academic dean, chair of the Department of Communication and the Faculty Senate, and senior development officer. He preached full time for congregations in Texas, Virginia, Louisiana and Maryland. He served as vice president and president of Enzor Travel Service and president of Enzor Consulting Inc.
In retirement he was founder and board chair of Global Samaritan Resources. He received GSR’s inaugural Founders Award in 2012. He also served on the board of Jeremiah’s Hope and other nonprofit organizations.
He was preceded in death by his parents, Edwin Enzor Sr. and Marinette (Loflin) Enzor; Norma, his first wife of 58 years; and a sister, Mary (Enzor) Davis. Among survivors are Susan, his second wife; a son, Brett Enzor (’88); a daughter, Lara Enzor (’90); an adopted son, Tangent Lin (’98); a step-son, James Vickers Jr.; and three grandchildren.