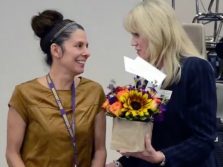 Leticia Ingram wasn’t expecting to receive 2015 Colorado Teacher of the Year, but there was no question in her colleagues’ minds about whether she deserved the honor.

A history and math teacher at Basalt High School in Roaring Fork School District, Leticia was awarded for her passion and expertise with English learners and their families after she was nominated by the school’s principal, David Schmid. She received an undergraduate education degree and master of science, religion and cross-cultural communication from Abilene Christian University.

“She’s a very talented teacher, but also so much more than that,” Schmid said. “She connects with the kids, their parents and the community. She believes in them, and that’s contagious.”

“Ingram is one of those multi-faceted educators working to build an inclusive school community,” said Elliot Asp, Colorado Interim Education Commissioner, who presented her with the honor. “She creates a classroom where students from different backgrounds feel safe to practice together and learn together.”

Among those who praised Leticia was Diana Sirko, superintendent of Roaring Fork School District.

“She is a tireless advocate for her students and works hard to help their families engage with the school and recognize the important role they play in supporting their child’s success,” she said.

In receiving the award, Leticia will travel to the White House in April to find out if she won the national title. She will also serve as a teaching ambassador to communities and organizations around the state and nation.

“I’m overwhelmed and shocked and humbled and excited,” she said after receiving the award. “I just have to give the whole honor to my school; it’s totally my students. All I did was tell their stories.”

Ingram said the best part was hearing how she impacted their lives.

“What teachers do really matters,” she said. “I think we forget.”