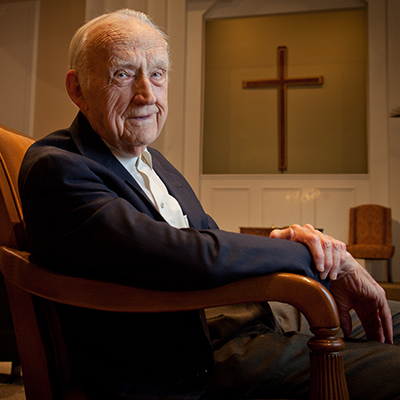 Noted scholar, author and church historian Dr. Leroy Garrett (’42) of Denton, Texas, died Sept. 29, 2015, at age 96. A memorial service will be held at Singing Oaks Church of Christ tomorrow at 10 a.m.
He was born in Mineral Wells and married Ouida Pitts in 1944. She died in 2010.
Garrett was the author of books including The Stone-Campbell Movement: The Story of the American Restoration Movement, What Must the Church of Christ Do to Be Saved? and his autobiographical A Lover’s Quarrel: My Pilgrimage of Freedom in Churches of Christ. For more than 70 years, he was known widely for espousing unity among Christians. He published the Restoration Review journal from 1952-92 and traveled to more than 30 nations during his seven decades of ministry.
He earned a bachelor’s degree from Abilene Christian University, and graduate degrees from Southern Methodist University, Princeton Theological Seminary (Th.M.) and Harvard University (Ph.D.). He was a professor of philosophy at MacMurray College in Illinois, Bethany College in West Virginia, Texas Woman’s University, and Bishop College in Dallas. In retirement he was an adjunct professor at Richland College in Dallas, Dallas Christian College and the University of Dallas. He also directed a Lilly Endowment project to teach philosophy to gifted high school students.
Garrett’s final address at Abilene Christian’s annual Summit was delivered in 2013; he was the event’s opening theme speaker in 2008. He received a Change the World Award from ACU in February 2006 during his alma mater’s Centennial Celebration and was a generous contributor to student scholarships benefitting the Partnering in the Journey Campaign.
He served on executive committees of the World Convention of Churches of Christ and the European Evangelistic Society, and he received Pepperdine University’s Distinguished Christian Service Award in 1993.
A resident of Denton for 53 years, he was a member of the Singing Oaks congregation.
He donated most of his papers to ACU’s Center for Restoration Studies (search the center’s database here) and his body was donated to The University of Texas Southwestern Medical Center in Dallas.
Garrett was preceded in death by his wife, Ouida; his parents, B.J. and Annie Garrett; five brothers; one sister; a son, Philip; and a daughter, Phoebe. Among survivors are a son, David Garrett (’81), one grandson, two great grandsons, and a brother, William J. Garrett.