Home/ ACU News/ Academic News/ Students have the chops to back Temptations
Main Content
Features Academic News Alumni News Campus News ACU Online All Categories
Academic News ACU News ACU Online ACU Remembers Alumni News Campus News Faculty Spotlights Features Graduate Programs Research Sports Student Experience Student Spotlights Student Success Undergraduate Programs Why ACU?
When the legendary Temptations perform a concert Sunday night in the Abilene Civic Center, its horn section will be powered by a considerably younger set of musicians, all of them Wildcats and most young enough to be Otis Williams’ grandkids.
Time stands still for no one, even Williams, now 73 and the only original member of the group still performing with it. But the Temptations’ iconic music – like “My Girl” and “Just My Imagination (Running Away With Me)” – still proves timeless for fans who flock to hear them harmonize and see their velvet-smooth choreography, a testament to the beat that defined a generation of Americans more than 50 years ago and ushered in the era of pop music. 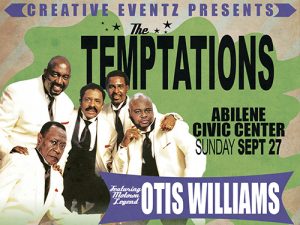 Originally known as the Elgins, the Temptations were a product of Berry Gordy Jr.’s Motown Records label in Detroit, Mich., and one its flagship acts, along with the Four Tops, Stevie Wonder, Smokey Robinson and the Miracles, the Supremes, and the Jackson 5, among others. Motown’s glory days were the 1960s and 1970s when some of the world’s most popular music was recorded in a small house/studio on West Grand Boulevard.
The Temptations’ wide-ranging music styles – ballads, rhythm and blues, psychedelic soul, funk, disco, and rock and roll – provide a challenge for the nine undergrads and one alumnus invited to play such a key role in the concert.
“This is such a great opportunity,” said professor of music Dr. Steven Ward (’92), who helped choose some of the music department’s strongest students from among the Jazz Band, Orchestra, Jazz Ensemble, Wind Ensemble and Concert Band. All but one is a music major and the other majors in biochemistry.
The group includes sophomore Mary Potts and senior Abigail Kellogg (alto saxophone); sophomore Anna Lawson and Guy D. Gamble (’73) (tenor saxophone); junior James Nix (baritone saxophone); juniors Cedric Dario and Grayson Hancock, and sophomore Jordan Morris (trumpet); and sophomore Geoffrey Driggers and sophomore Noah Hancock (trombone). Nix is the lone biochemistry major.
Potts said her parents didn’t believe the news at first. “They kept asking, ‘THE Temptations?!’ After the initial shock, they were so excited, especially my grandparents. That was their kind of music. I’ve always loved Oldies music and I never ever dreamed of having this opportunity so it feels pretty amazing. I still can’t really comprehend how cool this is.”
Driggers admitted his parents were “a little freaked out at first” to hear of his participation. “Playing in this gig makes me feel like an actual professional musician,” he said. “Of course, I’m very honored to be chosen, too. The whole thing is sort of a self-esteem boost.”
“My saxophone teacher played with the Temptations in 1969 when he was my age,” said Kellogg, “so when I told him that I’m playing for them he was floored because his career is coming full circle with me.”
“The students were mostly excited at first,” Ward said. “When the book of music for the show arrived, its size was a bit intimidating but we’ll have had four rehearsals by the time Sunday arrives, and they’re doing great.”
“The biggest challenge so far has been the music,” Driggers said. “It’s difficult, range-wise, in several places. It’s also been hard not to brag to everyone I know that I get to play with the Temptations. People tend to stop hanging around you as much when you do that.”
Kellogg said she liked how “hip” the Temptations’ music has remained through the years.
“It’s not like stuff you hear on the radio now,” she said. “Don’t get me wrong; I jam to Taylor Swift but there’s something about the vibe a funk or Motown group can get that a solo artist can’t create as easily.”
Ward said most of the students had not played all the styles of music involved in the concert but several can draw on valuable experience in the house band at Sing Song. Still, they will have just one rehearsal with the Temptations and their rhythm section on Sunday before the concert that night.
Ward said he played with some amazing jazz artists when he was a student, including Ernie Watts of the former Tonight Show Band, L.A. studio musician legend Steve Houghton and jazz trumpet icon Jon Faddis. “Those experiences changed my life as a musician, but I didn’t get to do anything with a group as internationally known as the Temptations,” he said.
The Temptations’ have charted 32 Top 10 pop and R&B albums, 23 Top 10 R&B singles, won three Grammys and received a Grammy Lifetime Achievement Award in 2013. Rolling Stone magazine ranks them 67th among its 100 Greatest Artists of all time. Six members of the group – including Williams – were inducted into the Rock and Roll Hall of Fame in 1989.
ACU’s director of orchestra and bands said the opportunity is remarkable but not unprecedented.
“It just continues a great history at ACU of giving our students the best possible experiences we can,” said Ward.
Purchase tickets here for the 7:30 p.m. Sunday concert by the Temptations in the Abilene Civic Center.
PREVIOUS POST   NEXT POST
SHARE: