Home/ ACU News/ Academic News/ Lytle to direct new ACU center, CEO Forum
Main Content
Features Academic News Alumni News Campus News ACU Online All Categories
Academic News ACU News ACU Online ACU Remembers Alumni News Campus News Faculty Spotlights Features Graduate Programs Research Sports Student Experience Student Spotlights Student Success Undergraduate Programs Why ACU?
Dr. Rick Lytle, longtime business college dean at Abilene Christian University, has been named director of its new Center for Leadership and Faith Development and CEO of CEO Forum Inc. in a collaborative relationship with an organization focused on spiritual development of business leaders around the world.
The announcement was made last night at CEO Forum’s biannual meeting in Chicago and Wednesday to faculty and staff in the university’s College of Business Administration. His 16-year deanship will conclude in Spring 2016 and a national search for his successor will begin this fall.
Lytle has been involved with CEO Forum for a decade. The organization comprises approximately 225 Christian CEOs and senior executives who serve companies with at least $100 million in revenue such as P&G, Walmart, ExxonMobil, CitiCorp and Ritz Carlton, among others. His new role includes developing a mentoring program allowing seasoned Christian executives the opportunity to mentor the next generation of leaders. 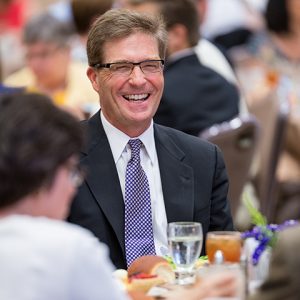 A portion of a major gift from alumni Mark (’86) and April (Bullock ’89) Anthony will fund COBA’s new center, through which Lytle will continue to direct the college’s Distinguished Speaker Series that brings top-flight business leaders and entrepreneurs to campus, and its popular Leadership Summit retreat for students each January in Colorado. He will continue as professor of marketing.
“While I don’t look forward to leaving the dean’s office, this new center and my role with CEO Forum opens a spectrum of additional opportunities for COBA to partner even more with the world’s best business leaders who also have a heart for Christ,” said Lytle. “I look forward to spending even more time with students and connecting them with some outstanding professionals who can make an important difference in their business careers and their lives.”
“This is an incredible honor for Rick, and it speaks to his Christlike character and reputation among the influential business leaders he has befriended through the years,” said ACU president Dr. Phil Schubert (’91). “This innovative partnership will provide our students and alumni with unprecedented access to business executives who are advancing the kingdom in the marketplace.”
Lytle’s tenure as dean saw COBA earn accreditation in 2004 from AACSB International, placing it among the top business schools in the world. The business college also has led ACU in developing short-term, faculty-led study abroad opportunities in Europe, Asia, Australia and Central America. More than 92 percent of COBA graduates find jobs within 90 days – a stellar accomplishment in today’s economy, thanks to a robust internship and career development program. Under Lytle’s leadership, student enrollment in COBA increased from 650 to almost 900 students and the endowment grew from $5 million to $30 million.
He earned a B.B.A. degree in management from Harding University in 1980, an MBA from Oklahoma State University in 1983 and a Ph.D. in marketing from Arizona State University in 1994. A native of Detroit, Mich., Lytle joined ACU’s faculty in 1991.