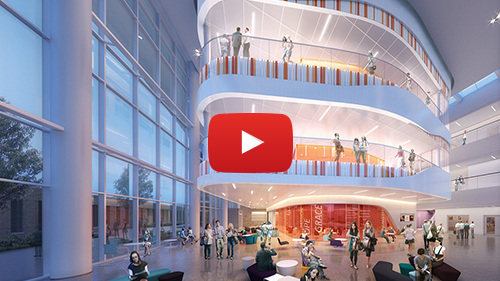 A recent gift of nearly $3 million from alumni Jon (’82) and Linda (Ellis ’83) Halbert has helped Abilene Christian University reach its capital goal in the Vision in Action (VIA) initiative to build three major science facilities.


The generosity of the Dallas couple means ACU has raised $45 million to build the 54,000-square-foot Halbert-Walling Research Center, the 85,000-square-foot Robert R. and Kay Onstead Science Center and 22,000-square-foot Engineering and Physics Laboratories at Bennett Gymnasium.
The university launched the $75 million VIA initiative in February 2014 with an ACU-record $55 million in gifts. Fundraising continues for science equipment and operational endowments, as does fundraising for Wildcat Stadium, a proposed on-campus venue for football. ACU has completed two of its five VIA building projects: new Elmer Gray Stadium for track and field, and women’s soccer, and a renovation of historic Bennett Gymnasium for undergraduate research by its internationally respected Department of Physics and Engineering.
Among earlier donors to the Halbert-Walling Research Center were Jon’s brother, David D. Halbert (’78) and his wife, Kathy (Gay ’78), who contributed $15 million from their Caris Foundation.
“We are extraordinarily grateful to Jon and Linda for their difference-making gift,” said ACU president Dr. Phil Schubert (’91). “The Halbert brothers believe in the importance of providing world-class science facilities for our students and faculty. David and Kathy stepped up with the first gift for a research center and Jon and Linda capped our fundraising goal for it. We accomplished this in record time for ACU, and I believe it will inspire other people to team with us to finish the rest of the Vision in Action initiative strong.”
The late Dean Walling, Jon and David’s grandfather, was an ACU trustee and founding chair of the university’s 21-year, three-phase Design for Development campaign that led to the construction of numerous major facilities in the 1960s and 1970s. A landmark gift in 1962 from Dean and his wife, Thelma (Bernard ’33), was the first to help build Moody Coliseum.
“Jon’s family has a long legacy of supporting and loving Abilene Christian,” said Linda Halbert. “We always loved Walling Lecture Hall and want to honor Dean Walling’s commitment to the school. We are enthusiastic about how these new facilities are changing the campus so dramatically.”
“Supporting the sciences at ACU is definitely a family legacy we want to carry on,” said Jon Halbert. “We are excited and inspired by the changes taking place and feel blessed to be a part of them.”
Jon said the couple did not make their gift for personal recognition but to advance a Halbert legacy through their family foundation and philanthropic interests.
“We are committed to healing disenfranchised people around the globe,” Jon said. He and Linda were founding contributors for ACU’s Halbert Institute for Missions, which honors the memory of Jon and David’s late mother, Jo Ann (Walling ’54) Halbert. “She loved to help people and build churches,” said Jon, who believes his alma mater has long espoused the kind of missional thinking permeating all its academic programs.
“It takes high-quality facilities to attract the best and brightest students and faculty,” Linda said. “What we’re helping build will make ACU as highly respected as any campus that educates future scientists and physicians to make a real difference in the world.”
Jon is board chair of Dallas fundraising and creative agency Pursuant and vice chair of Dallas poverty-fighting partner CitySquare. Together, the Halberts run the Jon and Linda Halbert Family Foundation. In 2012, they were co-executive producers of Rising From Ashes, a critically acclaimed documentary film about the Rwanda national cycling team.
Visit acu.edu/vision-in-action for more information about VIA projects.
PREVIOUS POST   NEXT POST
SHARE: