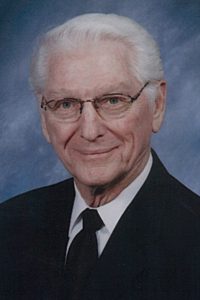 Former Abilene Christian Schools administrator and ACU fundraising professional Harold Thomas Lipford (’50) died April 18, 2015, in Abilene, Texas, at age 92.
A memorial service will be held at University Church of Christ on Wednesday, April 22, at 2 p.m. with a private burial service at the Texas State Veterans Cemetery in Abilene. Services are under the direction of Piersall Funeral Directors (733 Butternut St., Abilene, Texas 79602). Visitation with the family will be immediately following the service in the Family Room of the church.
Harold was born Sept. 28, 1922, in Fort Worth, where he graduated from Polytechnic High School in 1940. He was a sergeant in the U.S. Army Air Corps, serving from 1942-46 as a supply clerk supervisor in World War II. Following the war, he also served in Wiesbaden, Germany, in the Army of Occupation. He married Jeannette Scruggs (’50) on Sept. 3, 1948, in Abilene.
He attended Texas Wesleyan University from 1941-42 and graduated from ACU in 1950 with a Bachelor of Science in Education degree. He earned a Master of Education degree in administration from The University of Texas at Austin in 1956 and an Ed.S. degree from Vanderbilt University’s Peabody College of Education and Human Development in 1970. He also did graduate work at Baylor University.
Harold taught English and music in the Ozona public schools from 1950-52, served as associate minister of the Columbus Avenue Church of Christ in Waco from 1952-61, and taught Bible and music at Lipscomb Academy in Nashville, Tenn., from 1961-66.


In 1966 he became an assistant professor of education and superintendent of ACU’s Campus School, and was named elementary principal and high school choral director in 1973-74 when it became Abilene Christian Schools. He joined ACU’s development and public relations staff in 1975 as regional director of development and the Annual Fund. For years he coordinated ACU’s Visiting Committee programs and its Christian Education Sundays program. He was honored as the university’s Outstanding Staff Member for 1985 and retired in 1992 as director of university campus events after 26 years of service to his alma mater. ACU students named him one of the 1993 Homecoming Parade grand marshals.
He was instrumental in establishing Mission Church in Abilene in the 1990s. Harold served as a deacon at Abilene’s University Church of Christ, where he and Jeannette have been longtime members. While an ACU student, he sang with the A Cappella Chorus and on the men’s quartet. He was active in ACU’s Alumni Choral Reunion, and he and Jeannette performed with the Over the Hilltoppers group at Abilene Christian’s USO Show at Homecoming 1990 in Moody Coliseum. The Lipfords also supported the Abilene Opera Association.
Harold and Jeannette are beloved by thousands of talented students who found in the Lipford home an open door, a welcoming spirit, a love for God, and deep appreciation for the musical and theatrical arts. Harold quickly turned strangers into friends, mentoring them with words of encouragement and a gentle spirit. Behind the scenes, he quietly loved and served people without recognition. He was a Renaissance man who enjoyed learning new things and an artist who used his painting, pottery and gardening skills to bless others. Ever the teacher, he instructed and inspired others without being judgmental about a person’s ability, ethnicity nor station in life. He had an engaging sense of humor, loved animals and was meticulous in managing the details of each day.
He was preceded in death by his parents, W.C. and Mabel Lipford; a brother, W. C. “Sonny” Lipford Jr.; a sister, Jo Evelyn Lipford (’53); and a daughter, Susan Lipford (’77). Among survivors are his wife of 66 years, Jeannette; daughters Cindy (Lipford ’76) Hudson of Nashville and Amy (Lipford ’80) Wright; Croatian daughter Svjetlana Vuksic (’97); five grandchildren; and one great-grandchild.
Memorials may be made online to the Jeannette and Harold Lipford Endowed Music/Theatre Scholarship (or mailed to Gift Records, ACU Box 29132, Abilene, Texas 79699-9132).
PREVIOUS POST   NEXT POST
SHARE: